You are at:Home»News»Latest news on Asghar Farhadi’s Everybody Knows

Two days after completing shooting of his latest movie in Spain, the renowned director Asghar Farhadi and Spanish actor Javier Bardem, attended a session on December 2 in Madrid and spoke about their collaboration on the set of ‘Everybody Knows’.

“A film in which only the director is seen, does not work, the director must be invisible, the less present he is, the more space for the viewer,” said Farhadi.

According to the Spanish international news agency EFE, the director stressed that Bardem belongs to that “race of actors” that completely eliminate the distance with the character and that he should be convinced of what he is doing in every second. “He is the actor with whom I had to speak the most, to the last scene of the film,” Farhadi noted. 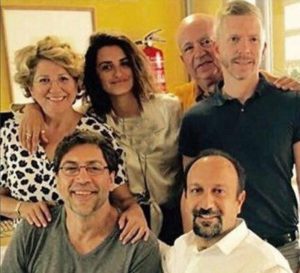 Bardem explained that the actor should also in a way disappear by surrendering to imagination. “It is clear that you work with what you have, but it is important to dare to take the imaginary leap,” he added.

‘Everybody Knows’, whose shooting lasted fourteen weeks, is a family drama that in addition to Bardem has Penelope Cruz, Ricardo Darin, Eduard Fernandez, Barbara Lennie, Inma Cuesta and Elvira Mínguez in the cast.

Of the content little is known: a woman travels with her family from Buenos Aires to her hometown in Spain for a celebration; but what was to be a brief family visit will be disrupted by unforeseen events.

Farhadi revealed in the meeting that the origin of the story goes back to a trip he made to the south of Spain 12 years ago, when he found the streets papered by the face of a missing girl who had been kidnapped.

About the character of Bardem in the film, he stressed that he is “an innocent, normal man, caught in a difficult situation”.

Collective Work
Bardem confessed to feeling somewhat nervous about the fact that the Iranian director usually works with unfinished scripts, a custom that is because Farhadi considers cinema as “a collective work”.

“Directing does not mean knowing more than others, I have to listen to others, and it’s not that I do not know how to do my job, it’s that I trust others. It would be boring to just execute a text,” explained Farhadi.

The 100% Spanish project, ‘Everybody Knows’ has an estimated budget of $12 million. It was filmed in Spain, France and Italy and is scheduled to be released in 2018.

On November 30, renowned Spanish actress Penélope Cruz published a photo of herself together with Farhadi and three other actors of the film on her Instagram feed and wrote, “the last day of filming Todos lo Saben (Spanish name of the movie) with this amazing genius Asghar Farhadi. We have been together in this adventure since August and I am so grateful to this master of life for being part of it.”

Farhadi, 45, is the first Iranian director to have received more than one Oscar nomination and is also the director of the first Iranian film that has won such a trophy. In 2012, ‘A Separation’ was rewarded with the Best Foreign Language Film Award. And his ‘The Salesman’, released in 2016, won the Oscar in the same category earlier this year in February.

According to Cinetmag.org, ‘Everybody Knows’ has now entered the post-production phase. Hayedeh Safiyari, the only crew member from Iran, will soon begin editing the film in Spain. The award-winning film editor has been long-time collaborator with Farhadi. She has edited four of his films including the two Oscar winners.