With the passing of Romanian director Radu Gabrea earlier this year, it was anyone’s guess whether the small cineaste-friendly film festival he founded six years ago, in Transylvania would have the capacity to survive, much less thrive. 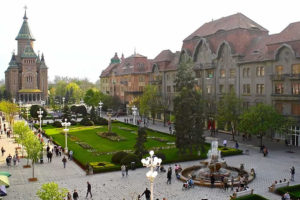 But to the happy surprise of festival afficianados in Europe and beyond, Gabrea’s cinematic gem – formerly called the Medias Central European Film Festival (MeCEFF) and set in the sleepy hills of central Romania — will resurrect itself September 3-9 in Romania’s third largest city, Timisoara. 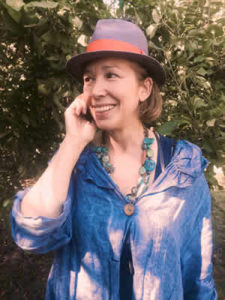 Re-christened the Central European Film Festival (CEFF), the 7th edition of the festival plans to offer twice as many films in competition from twice as many countries (14 in each case), with the international jury handing out seven major awards. There will also be a broader range of cultural events, seminars, student film screenings, film workshops, sidebars and public outreach in a city which itself is slated to be a European Capital of Culture for 2021.

It’s a big boost for Gabrea’s jewel-box festival that had primarily catered to a relatively small nucleus of heady, auteur-loving film professionals, much as the Telluride Festival does in the States. And it is happening barely six months after the Romanian Film Union’s brief but laudable memorial retrospective last March in Bucharest, honoring a 50-year career recognized internationally for its range of politically engaged, often refreshingly idiosyncratic feature and documentary films. 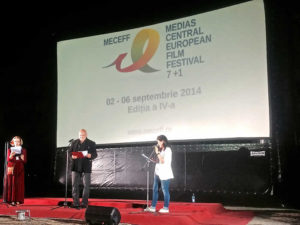 This year’s relaunch is due in large part to the unflagging efforts of Gabrea’s wife, the Romanian stage and screen actress Victoria Cocias.  The president of the EuroFest Association and star of several of Gabrea’s films, Cocias joined forces with Timisora’s mayor and a number of local and national organizations – among them the Ministry of Culture, The Romanian Cultural Institute (ICR), the Guild of Romanian Filmmakers (UCIN) and the Federation of Jewish Communities in Romania – to bring the expanded showcase together in record time. 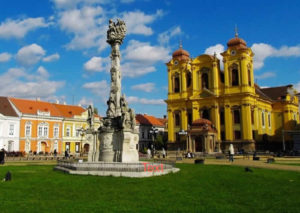 Timisoara’s Liberty Square, where CEFF’s pubic screenings will be held

Cocias has been an indefatigable asset of the old festival and will aim to fill her husband’s capacious shoes as its new president. Marian Tutui, a professor of film studies at Hyperion University and the former artistic director of the Divan Film Festival, will serve as artistic director, with actor and director Alexandru Mihaescu weighing in as project manager.

For the general public, festival organizers will be broadening their reach in a new, non-competitive international Panorama section of seven films which have previously won awards. The section is geared to “actively foster participation by… and dedicated to, the community as a whole,” and will be screened in Timisoara’s Liberty Square. 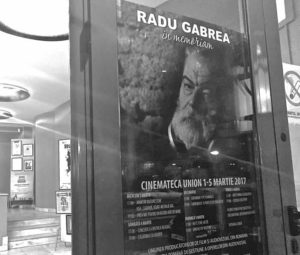 Festgoers and organizers of the past MeCEFF festival held in Medias– a Transylvanian town better known for its natural gas production than its arts cinema consumption — had always recognized the tendency for locals to consider the festival as somewhat elitist by choice. No doubt this fall’s expansion to a more youthful and vibrant location is designed to reach out to future generations of film lovers and filmmakers.

During his seven years leading the festival, Gabrea was unapologetic about his passion for fostering a greater appreciation and awareness of art cinema in Medias and Transylvania, not only of the rich repertory of European auteur films, but also of the history of Yiddish cinema in Europe and beyond.  “I want to help the town and region understand the exceptionally rich film traditions of Romania and Central Europe in the context of some of its greatest practioners – Milos Foreman, Jiri Menzel, Jaromil Jires, Andrzej Wajda, Jerzy Kawalerowicz, , Andrei Miunk, and Istvan Svabo., for example, “ he told CWB in 2013.  “We never knew even up until a week before the opening, how much money we had available for the festival.” 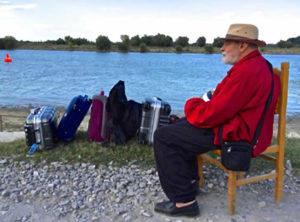 Streaming the future: Gabrea on the Danube in 2015

For Gabrea and Cocias, it was always a struggle financially whether this level of cineaste curation could economically survive given the festival’s shoestring budgets.  In the end, through sheer willpower and the force of Gabrea’s personal charisma. they managed to build their passion project into a beacon of arthouse cinema in central Romania while also churning out such well-received feature films such as “Lindenfeld” and “Three Days Before Christmas” (both starring Cocias).

It is still unknown what will become of the feature film “Pianos in the Mist” which Gabrea was directing — and, as always, chasing funds for — when he died. The movie, about half of which has been shot, is a road movie and love story set in the serpentine waterways of Romania’s Danube Delta in 1948.

Along with a retrospective of Gabrea’s films, the new CEFF festival includes a Student Day featuring student movies from the Bucharest Film University and award-winning short films from the festival’s partner, Timishort.  And continuing a Medias tradition, there will be a selection of Yiddish films shown in the city’s synagogue. 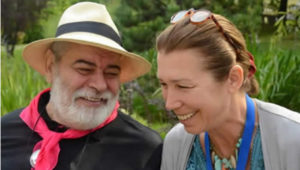 In another new twist, the festival will add seven Balkan countries to the competition, which will now host one award-winning feature from each of the 14 countries:  Austria, Bosnia and Hertzegovina, Bulgaria, Croatia, Czech Republic, Greece, Hungary, Macedonia, Montenegro, nd, Romania, Serbia, Slovakia, and Slovenia.

A CEFF symposium, The Culture of Minorities, will investigate the voluntary and involuntary minorities in Europe that reach beyond ethnicity and are demanding, through cinema and other voices, the respect for differences and the promotion of tolerance as a fundamental value. 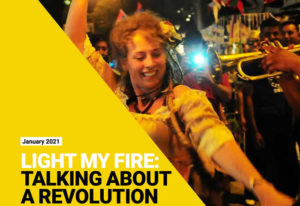 Also on board as festival organizers are Diana Petrut as head of PR and communications; Stefan Lucut as web and logo designer; Dorina Oarga as industry manager; Gabrea’s office staffer Cristian Cocias as a project manager; George Bufan as photographer; and Gabrea’s daughter, Magdalena Schubert, as artistic counsellor and translator.  Melania Oproiu will serve as video editor.

The festival’s seven screening sections include:  Competition, Panorama, films about minorities and tolerance, restored films in the Yiddish language, films about Eleusina and Novi-Sad (the other future capitals of European culture), student short films, and a Radu Gabrea retrospective.

Timisoara offers its own bit of historical relevance as CEFF’s new host.  The city is the birth place of Johnny Weissmüller (1904–1984) and, just 40 miles east in the city of Lugoj, Hollywood’s most famous Count Dracula, Bela Lugosi (1882-1956), was born.

In 1884, the city became the first in Europe with electric lighting, an event harkened by Timișoara’s slogan as Europe’s upcoming cultural capital:  ‘Shine Your Light!’

Timisoara also played a role in another bit of Dracula lore. In 1924, Lajos Pánczél published in Timisoara the novel Death of Dracula, based on Károly Lajthay’s 1921 feature, Dracula’s Death (Drakula halála).  It was the first film ever made about Dracula, and to this day Panczel’s novel is the sole remaining artifact of Lajthay’s opus, the light for which is still to shine:  the movie, alas, has gone missing for decades.  ***