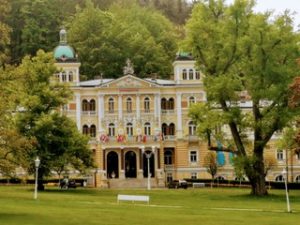 The Dead Poets Society: The historic Centralni Lazne hotel in Marienbad has hosted famous writers and potentates such as Goethe, Churchill, Twain and Franz Josef II

There’s a now-famous scene in the film Dead Poets Society when Robin Williams, playing the inspirational instructor of an all-boys school, hops onto his classroom desk and commands his young flock to widen their life outlook and seek out “the extraordinary.”

“Why do I stand up here?” Williams asks the boys. “I stand upon my desk to remind myself that we must constantly look at things in a different way… Lean in boys, can you hear that voice whispering to you? Carpe diem! Seize the day.”

I thought of Williams’ hop — really a leap of faith — as I sat at my own desk one night in early June, wondering whether to push “Cancel” or “Book” on a last-minute reservation for my maiden trip to Mariánské Lázně, better known by its German name, Marienbad.

Granted, this was hardly carpe diem, since the only thing I had “seized” in three months of lock down was a recurring fantasy of escape, basically to anyplace other than the backyard. And preferably to a fabulous spa hotel with mud packs for my Netflix-induced backache. 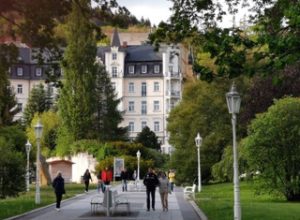 But how could I “seize the day” when the day itself had been seized by a global health emergency?

After all, Marienbad had only just re-opened for business, and I reasonably worried whether the town would be ready, and safe enough, for prime time.

But then tiny, unreasonable nightmares began playing in my head. I imagined rows of Edwardian steam rooms filled with naked, sweating behemoths huddled three centimetres apart at 90° C. I saw swarms of ungloved pinkies picking away at the breakfast buffet. Silly I know, but then I’d just seen the riotous La Grande Bouffe for about the fourth time. Netflix again.

Then again, this wasn’t just any serviceable inn, but one of the most historic, best-reviewed spa hotels that had been a destination of poets and potentates over the centuries, and the largest in the Czech Republic for natural medicinal spa treatments. 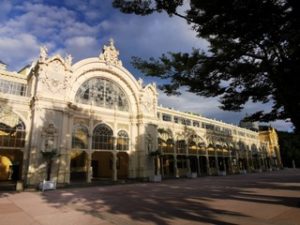 The attentive management had taken pains to assure me that all necessary safety precautions would indeed be in place. Yes, there would be social distancing, along with limited pool and sauna occupancy (hooray). Even individually saran-wrapped cheese plates at the breakfast buffet (an oddity for sure).

There would be mineral baths, gas baths, and peat packs, too,
with health experts located on site.

And best of all, the whole deal was offered at CoVid-era, bargain-basement rates.

The following weekend I hopped on the Pendolino Express with a friend, bound for Marienbad. It was the best leap of faith I’d made in three years as an expat in Prague.

Arriving so soon after the country opened up, we knew we could hardly expect to find the bustling Shangri-la of the tourist brochures. Most of the restaurants and many of the town’s historical gems were still closed. 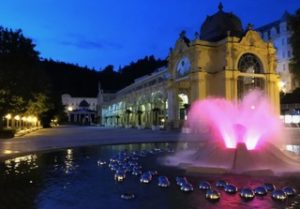 But Marienbad had been on my bucket list ever since I saw Alain Renais’ Last Year at Marienbad in a college film class. Though none of that 1961 classic was actually shot in Marienbad, somehow it captured what I imagined to be the mystique of this royally-pedigreed, 240-year-old jewel in Bohemia’s crown.

Of course, the hotel was as elegant and restorative as I expected. Kudos to my spa attendant Ivana, who expertly slapped down packs of peat in a perfect vector of spinal relief.

But gone missing were the strolling crowds along the Colonnade, the Brahms quartets outside the Pavilion, the theatre shows and grand buffets and moody jazz trios in the Casino’s gilded salons. All still closed. I longed for the sheer pleasure of people-watching. It all seemed strangely quiet and untrammeled.

Yet I found music in that stillness. At sunset, the parade of neo-Baroque columns marching along the empty Colonnade was a visual melody of unobstructed views. When the nearby Singing Fountain suddenly serenaded me with a Chopin polonaise under the stars, I had found my own private concert hall, offering a command performance for a grand audience of one. 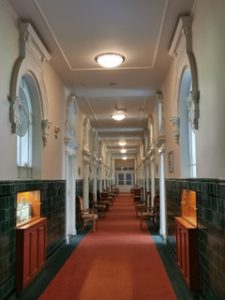 The recent spring rains had painted the parks in an infinite palette of pinks, greens and lavenders – there was music there, too. I spent a morning visiting the Park Boheminium and its myriad of Lilliputian castles. I walked along the Goethe Trail to the accompaniment of owls. I hunted down the haunts of Wagner, Gogol, Chopin and Freud, with bits of Parsifal dancing in my head.

Never mind my aches and worries. This was why I had come to Marienbad — to seek out the extraordinary in the remnants of the ordinary (as if its hurly-burly promenades and elegant soirees could ever be counted as ordinary.)

Most of all, I think I discovered – but who knows? – that singular mystique of Marienbad that I had sensed in the movies. Legions of artists and emperors who took their cures here and left their mark in history must have sensed it too, then nurtured it and left it as their calling card.

So whenever you call on Marienbad and wherever you wander, take a moment to lean in… and listen. Their whispers are everywhere, like an ancient tune that won’t let go: