You are at:Home»CinéEqual»A conversation with Justin Mashouf about The Honest Struggle

The Honest Struggle tells the story of a Muslim convert that after 25 years of incarceration, re-enters society in the South-side of Chicago to face the same streets that ruined his life. The film is a raw portrait of a man struggling with his past as a gang chief while trying to survive an honest life and redefine himself in a world in which he feels no belonging.

To learn more about this film we had a text and video interview with Justin Mashouf, director of The Honest Struggle. 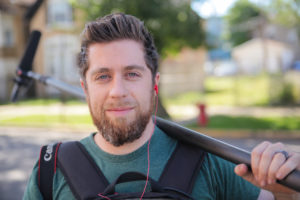 Justin’s 2011 short, Spring Movements, is a dance film dedicated to the “Arab Spring” uprisings throughout the Middle East and North Africa. Spring Movements, originally designed to be exclusive to the Internet, had multiple international television broadcasts on the Al Jazeera English program “Frames.”

Mashouf’s 2009 documentary Warring Factions focuses on his journey to Iran to find break dancers and bridge the political rift between the US and Iran with hip hop and traditional Persian martial arts. Warring Factions has received numerous international film festival screenings, over 20,000 digital downloads and was nominated for Best Documentary and Best Original Story at the 2008 Noor Film Festival.

Bijan Tehrani: Please tell us what motivated you to make The Honest Struggle?
Justin Mashouf: I was introduced at an early age to the autobiography of Malcolm X and in much of the transformation that Malcolm X goes through is his journey through the justice system and his introduction to Islam in prison.  When I was in college finishing my first film I was contacted very fatefully by a prison chaplain, in North Dakota, who had found my email from a Muslim Student Association website. They were looking for pen pals for the inmates. I started writing to Muslim inmates and exploring that world and found it very fascinating. It had its own set of social norms and its own system of community protection. I wanted to cover this in my next film as a documentary. In 2009 due to limitations of being an independent production, I realized that I wouldn’t be able to get access to a state or federal institution. I pivoted the story to be about people exiting prison. I found an organization called the Inner-City Muslim Action Network in Chicago which I founded the first Muslim faith based reentry home. I began filming with them in 2010. In 2013, I wanted to cover a person who is entering the house, the day that they have left prison, until the day that they become independent or they reach their parole day. Sadiq, who is the main character of the film, was released in 2013, and I stuck with him until we finished filming in 2017.

Bijan Tehrani: How challenging was making of The Honest Struggle?
Justin Mashouf: When I first set out to make this film I did not think it could be as difficult as it was. I was naive about complexities and sensitivities around filming men leaving prison, gaining trust and gaining access to my subject and the organizations that were assisting in the reentry process. Also, like other documentary filmmakers, funding the project is a challenge. I was blessed to receive a couple of grants that helped me. Early on the process I received a seed grant from the Hartley Foundation, who support films that are faith based. They also became the fiscal sponsor of the project, which was very important, as it allowed me to receive funds from private donors and larger grant giving organizations that required a nonprofit status. Then I received my largest grant from Islamic Scholarship Fund and a final piece of funding came from the Neda Nobari Foundation, which enabled me to finish the post production of the film.