You are at:Home»Festivals»Istanbul’s Pera Museum opens a festival with On the Beach theme

Pera Museum begins the summer season with the “On the Beach” movie program. With movies from 1951 to the present day from Turkish and world cinema, the program offers a wide selection of examples from classic and current cinema.

Addressing the beach as a space, “On the Beach” is being held in parallel with “Istanbul’s Seaside Leisure: Nostalgia from Sea Baths to Beaches.” It focuses on the transformation from the sea bath to the beach in the 1870s and the 20th century at the Pera Museum and Istanbul Research Institute.

The movies shown within the scope of the program indicate that the romantic perspective and the delightful moments on the beach can turn into the beginnings of dark holiday stories.

In addition to the films of master directors such as Eric Rohmer, Michelangelo Antonioni, Jacques Tati and Otto Preminger, the representatives of the French New Wave Movement, there are also movies by recent directors such as Asghar Farhadi, Ulrich Seidl and Yorgos Lanthimos.

Here is a quick look at the films in the screening program.

While the holidaymakers flock to Hotel de la Plage, the daydreamer and peculiar Hulot arrives at the hotel with his car and dazzles tourists trying to enjoy their vacations with his clumsiness.

Hulot’s jokes and misfortunes on canoes, horses, beaches, tennis courts, hotel restaurants, cemeteries or picnics follow one another. It is not possible for any place Hulot enters to remain as a peaceful and serious environment.

The gallery of unforgettable portraits director Jacques Tati gracefully draws and his stance against the flow has turned the movie into a poetic burlesque masterpiece since 1950s.

Directed by Esat Özgül, “Ne Sihirdir Ne Keramet” (Sim Sala Bim) follows the funny events that happen to İsmail Dümbüllü, who arrives in Istanbul. Dümbüllü is fired by the manager of the theater he works with on the grounds that he is neglecting his work.

They promise to meet in Istanbul with his girlfriend, Aysel. He arrives in Istanbul after an

adventurous journey. While he works on numerous jobs with his friend Rasih, he looks for Aysel. When everything is going bad, the magic wand that a jinni gives to him in his dream is going to be very helpful. 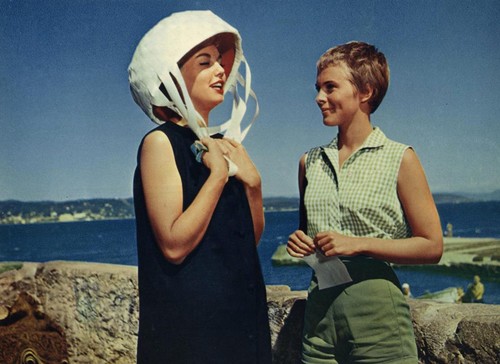 A 17-year-old but very mature Cecile, played by Jean Seberg’s in a very natural way and her wild father Raymond (David Niven) arrive at their Mediterranean villa escaping Paris.

Director Otto Preminger emphasizes the contrast between the sadness of the characters in black and white (“sadness”) in Paris and the bright and colorful summer at the French Riviera.

When they finally achieve the luxury lifestyle they desired and are free of their responsibilities, the bronze-skinned duo lose themselves in free love, fast cars and bodily pleasures.

However, when Raymond decides to get married, Cecile’s capricious character will lead to a pathway that will end in disaster and affect everyone’s life around her.

With this masterpiece Michelangelo Antonioni invented a new movie grammar. “L’Avventura,” one of the symbols of the 1960s challenging tradition and having an impressive narrative, follows the mysterious disappearance of a young woman on the yacht tour around Sicilian coast and the search of her lover (Gabriele Ferzetti), who has lost his loyalty, and her closest friend (Monica Vitti) to find her.

This internationally renowned sensational movie of Antonioni is a story of perfectly shot modern boredom and spiritual isolation. 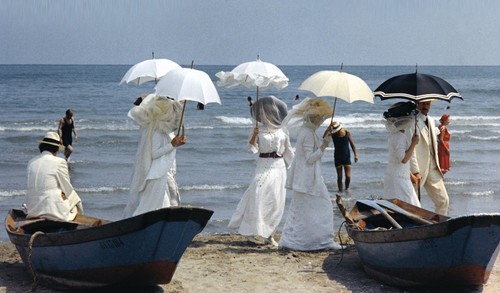 Adapted by Luchino Visconti from Thomas Mann’s novel with the same title, “Death in Venice” is a visual triumph and one of the best literary adaptations in cinema. One of the themes of Mann’s extraordinary narrative is about the artist getting to know the power and validity of physical beauty.

Visconti’s cinematic approach reflects the attitude towards this theme in every shot. The glory of Venice, the grace of Aschenbach’s seaside hotel, the masculine and feminine perfection of the young Tadzio, all of these elements offer the chance to viewers to get lost in details or embrace the richness of the scene as a whole and has been shot fully and with a casual yet precise attitude.

Pauline at the Beach

The hero of “Pauline at the Beach,” one of the most favorite movies by Erich Rohmer and while telling the story of a summer fun, which also gives deep messages, is the 15-year-old Pauline, who is left in the middle of love games and deceits of her adult friends on a short holiday on the shores of Normandy.

While Rohmer focuses on all complexities and confrontations of the comedy in the bedroom, he also tries to honor the sincerity of youth. This enthusiastic and fun atmosphere is visible in sunny images of the great cinematographer Nestor Almendros and the cast filmed in their fashionable swimming suits of 1980s consists of Rohmer’s favorite actors and actresses.

The third of “Four Season Stories” of Rohmer, this movie offers a lively and intelligent analysis of French society and teenage love.

Dinard is a coastal town in France’s Breton region, famous for its villas and hard ocean breezes. Gaspard comes to the beach to meet her girlfriend Lena, but while he waits for her, two other young women attract his attention.

While he claims to be in the hands of fate, we realize that his determination to control the opportunities of love he faces becomes stronger. Gaspard, who shows attention to both women awaits protection, guidance and friendship from the witty and educated Margot while flirting with the hot disco queen, Solene.

Gaspard, who is not very talented in winning the hearts of women also does not know what he really wants, passes a decision which will lead him to a very difficult situation and invites three women, including Lena who arrives within few days without informing him, to a trip in Quessant.

Eternity and a Day

The great writer Aleksandros (Bruno Ganz) decides to leave the seaside house he has lived throughout his life. Aleksandros sets on a strange journey after finding a letter from his wife Anna (Isabelle Renauld) about a summer day 30 years ago, in which the past and the present are intertwined.

As he pursues fictional words for his novels, he realizes that he missed the happy moments of life. He wants to bring those moments back for a day-for eternity. “Eternity and a Day,” with the impressive acting of Bruno Ganz is one of the masterpieces of Theo Angelopoulos. The movie was awarded the Golden Palm at the 1998 Cannes Film Festival by the jury lead by Martin Scorsese.

Directed by Yorgos Lanthimos, the film passes in Kinetta, a holiday town in Greece that is empty outside the holiday season and is home to migrant workers.

An undercover cop who is obsessed with cars, video cameras and Russian women is investigating a series of murders committed in the region. He asks a lonely guy, who works at the photographer’s to shoot videos with his camera and a young woman who is a housekeeper at a hotel to play the female victims.

This strange trio, with the police officer serving as director, impersonates a series of murders. The police officer pays extreme attention to detail in shootings but is not scientifically clear what he is aiming.

We cannot learn anything else about these three people. Not even know their names. When the holidaymakers flock to the town, they disappear into the crowd.

The Beaches of Agnes

In this exquisite movie about memories, the French director Agnes Varda mobilizes the cinematographer’s talent to bring together the real and the imaginary, the past and the present and happiness and pain.

The 81-year-old artist keeps her memories alive with his movies. In “The Beaches of Agnes,” Varda reminisces about her childhood in Belgium through clips from her own movies, old photographs and exquisite portraits, her connection to the French New Wave, her marriage to director Jacques Demy and the shootings of her movies. Even if you do not know Varda, you can enjoy this journey to her treasure chest filled with memories.

When Ahmet, who has lived in Germany for many years, returns to Iran, he and his old friends decide to take a vacation near Caspian to celebrate.

Sepideh, who plans this three-day escape invites Elly, the kindergarten teacher of his daughter without telling everyone. He wants to introduce this young beautiful woman to Ahmet, who left behind an unhappy marriage in Germany.

The first day of the holiday flows through the laughter of old friends. But the next day this enthusiastic atmosphere gets lost under dark clouds. Elly suddenly disappears. The young woman leaves behind unanswered questions and her bag.

While Ahmet and his friends search for Elly, they find much more than what they expected. As the secrets and lies start to surface, no one will be ready to confront the facts. “Elly” is directed by awarded Iranian director Asghar Farhadi.

The “Paradise” trilogy of Ulrich Seidl opens with Teresa, who believes that paradise is in earthly love. Experiencing relationships with one womanizer to another, from one disappointment to another on a beach holiday in Kenya, she realizes beach lovers are commercial.

The movie focuses on old women, old men and African and European concepts, the market value of sexuality, the power of skin color and the story of the exploited who have no choice but to exploit others through sex tourism.

The director of award-winning films and documentaries such as “Dog Days,” the movies in Seidl’s trilogy is set up through holidays of three women in the same family.

Deniz and her friends who did not see each other over the summer have a lot to discuss. Now seniors in high school, the boys have suddenly gotten taller, new albums have been released and finally, there is natural gas in Balıkesir province.

While their parents are busy with work, Deniz and her friends are still confused about their university choices. While she is getting closer to Kaya, she cannot forget about her guidance counselor, Fırat. She wants to prove to her friends that this is “something different.”

Deniz dreams of a different life than friends and family. Ankara instead of Istanbul, social sciences instead of science. Another world but where? The film is directed by Turkish directors Zeynep Dadak and Merve Kayan.

Bu Sahilde (On this coast)

This short documentary of Merve Kayan and Zeynep Dabak is a curious take on the mood of people on holiday. Holidaymakers who wander from home to the beach and clubs shed their skin as the winter gets close, they live in a different rhythm in the holiday destinations visited for a short time.

Balconies with open doors, boats on the beaches, roaring sea motors, the temporary tattoos on the night market point out to the longing for fantasy but here is something that never changes: routine.