They say it takes a village to raise a child. And Jeanne Herry’s sensitive second feature, In Safe Hands, illustrates how that proverb is all the more incisive when a newborn is separated from his mother at birth. A glimpse into the intricate anonymous-mother adoption system in France, the ensemble film follows two parallel story lines — that of little Théo, from his birth to finding a home three months later; and the agonizing process of one very determined prospective mother (magnificently portrayed by Elodie Bouchez). In between, the infant 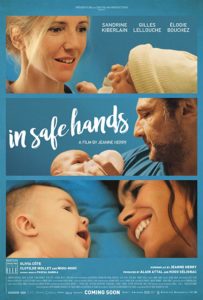 moves from hand to hand, through the astonishingly fine-tuned process of bonding, nurturing, communicating and adoptive match-making. The film is so truthful and unfussy, the score so unobtrusive, it almost feels like a documentary at times. Herry directs with such a light hand, you barely feel her presence, yet she has utter control of every detail. And each and every member of the excellent all-star cast gives a beautifully understated, nuanced performance — babies included — in this delicate, heartfelt study of one very real, very human “village”.

Literally born into show business herself, writer/director Jeanne Herry is the daughter of singer Julien Clerc and iconic French actress Miou-Miou, who plays a pivotal role in In Safe Hands. Herry began her career as an actress, performing in such films as Louis Malle’s May Fools and Patrice Chéreau’s Gabrielle (COLCOA 2006). She made her directorial debut with the dark comedy Number One Fan (COLCOA 2015, Critics Special Mention), which was nominated for two César Awards. She directed two episodes of Call My Agent! (season 2) for France 2 (COLCOA 2016, Best Series Award). In Safe Hands, her second feature as writer-director, was nominated for an impressive seven César Awards — for Best Actress (Sandrine Kimberlain and Elodie Bouchez), Actor (Gilles Lellouche), Musical Score, Original Screenplay, Director and Best Film.

In Safe Hands will be screened at COLCOA  on Thursday September 26 – 7:45 pm – Renoir Theatre

At Cinema Without Borders we had the opportunity of interviewing Jeanne Herry, writer and director of In Safe Hands:
Bijan Tehrani: What motivated you to make “In safe hands?”
Jeanne Herry: I was looking for a new subject and one day a friend involved in the adoption process left me a message saying the adoption office had a baby for her. The phone conversation was like a bolt of lightning and evoked a thousand questions. I wanted to know where the baby came from. I researched into giving birth anonymously, on the laws, the protocol, the people who accompany the whole process. I discovered a whole world which inspired me to write a film, with wonderful characters, with strong images, a dense story with tension and originality. So I took the plunge.

BT: The visual style of your film is amazing, it has an undertone of a documentary, without pushing it to far. You know you are watching a drama, but a believable one, close to reality. How did you come up with this style?
JH: I tried to put the direction at the service of my story. As close as possible to the characters, to try and breathe with them. Truth was primordial but not naturalism. My goal was to direct a psychological action film, an emotional thriller that captures action in looks, the body, the words. 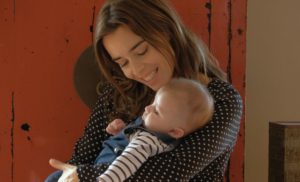 BT: “In safe hands” while following the process of an infant adaptation, it includes several layers studying social, psychological and legal issues of adaptation. In a movie it could be a big risk as it may lose the audience attention. But you have managed to bring a balance and interaction between these layers, please tell us how you did that.
JH: The film deals with lots of themes although it’s not a film with a message. I tried to tell and not to explain, not to go into heavy details about the social worker system or the relationship to maternity. It’s just the story of a baby who meets a woman and those that made it possible.

BT: Casting in your film is great, how was the casting process?
JH: Thank you! I wrote it with Sandrine Kiberlain, Gilles Lellouch and Olivia Côté in mind playing their roles. I quickly thought of Elodie Bouchez and Clothilde Mollet. The idea was to constitute a wide panel of women and actresses (well known or not – from the theater or cinema.). And to put an actor in the center of their story. I thought it would be interesting to attribute the ‘maternal’ caring side of the baby to a man, full of sensitivity and kindness but dependable too. From a cinematographic point of view I thought it would be interesting to have an actor at this point of the story. It was doubly amusing for me to work with an actor regarded as ‘virile’ in French cinema ! I just asked him to mobilise his sensitive side. All the actors were remarkable.

BT: How do you work with your actors, do you go through a lot of rehearsal sessions? Do you allow any improvisations?
JH: I worked very hard on the script and the dialogue to give the actors a lot of precision. We had a short read-through before shooting to ensure the characters are clear in each scene. Then I asked them to learn the text by heart and then we worked together on the set. I never improvised as that doesn’t inspire me. They became co-authors of the characters by inhabiting them not by inventing words and reactions.

BT: How do you see the success of In the Safe Hands in US market?
JH: I am so happy to be in LA to present my film. I’m a bit worried but curious. Hopefully the audience will like the film and find it interesting and hopefully it will touch them.

BT: Is a festival like COLCOA helping to promote French films in order to reach the audiences and fine distribution in US?
JH: Of course. I am incredibly lucky to present my film at Colcoa – a wonderful place to be screened and to meet people!