In World War III, Iran’s Oscar entry directed by Houman Seyedi,  Shakib is a homeless day laborer who never got over the loss of his wife and son in an earthquake years ago. Over the last couple of years, he has developed a relationship with a deaf and mute woman, Ladan. The construction site on which he works today turns out to be 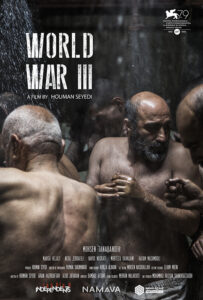 the set of a film about the atrocities committed by Hitler during WWII. Against all odds, he is given a movie role, a house and a chance at being somebody. When Ladan learns about this, she comes to his workplace begging for help. Shakib’s scheme to hide her goes tragically wrong and threatens to ruin his newfound status and what seemed to be the opportunity of a lifetime.

Born on 29th of November 1980 in Rasht, Houman Seyedi is a prolific director, scriptwriter, editor and actor in Iranian cinema and theater. He’s a well-known movie actor in Iranian film and TV industries and has already acted in 44 feature and TV films and series, including Asghar Farhadi’s Wednesday Firework. Seyedi runs one of the most prestigious film schools in Iran teaching film acting and has introduced many young actors to Iranian cinema. He made a couple of short films before directing his debut feature film, Africa, in 2011 and has received numerous national and international awards for his films as well.

BT- In World War III, there are different factors that push Shakib to the madness at the end of the film, poverty, brutality of those with money and power. What do you think?
HS- It’s very clear that I do not consider SHAKIB to be a crazy or psycho character, he’s a very normal guy but a victim, who has been victimized by nature, life and people. He’s lost everything in a period of his life and in another period he’s been given some gifts which are all fake and not real. However, he tries to revive himself through all of this and looks for a better life, which at the end, he loses again. He’s like a puppet in the hands of powerful people whose personal interests are more important than anything or anybody. Using the excuse of a movie set, I created a world which is very similar to the world I am living in now.

BT- Are you implementing in World War III that our lack of knowledge from history could turn us from an oppressed person to an oppressor? 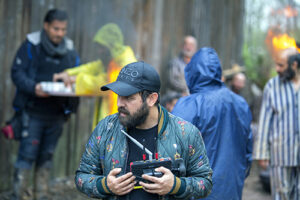 HS- History has never been like homework that one studies at school, but it’s a case study for the life of any human being. I believe all human societies should review history as history is mostly to guide us not to repeat tragic events like World War II or not to let any dictator be born again. We have to review history step by step, otherwise, such lack of knowledge will lead us to a dictatorship or to a way of helping creating dictators. As you may remember, when the director of the movie asks Shakib if he knows Hitler and he has no answer, it proves we have someone here who has no idea of history.

BT-Looking through the structure of World War III, it seems that it has been well thought out in detail in the screenplay writing stage, leaving no room for improvisation, was it like this?
HS- Fortunately or unfortunately, I do not believe in improvisation and I think all should be set up and defined in advance. Improvisation, for me, does not mean changing the position or a main concept within a sequence. I may use improvisation just to make the moments closer to real life and it cannot change anything dramatically but just help make the scene more believable.

BT-How did you go about casting World War III and how did you work with the actors
HS- I talked to Mohsen Tanabandeh, who is a professional actor, even before completing the script as I had to write the character in detail, so we both knew that we would work together before finalizing the script as he had to lose weight and rehearse and study such characters. I did my best with most of the employed crew that they could go in front of the camera and act as well! As I avoided using professional actors for such characters on the set of a movie, while working behind the scenes, they were also rehearsing for their roles in the movie too. Except for Neda Jebreili who is a professional actress, I even asked her to accompany me in pre-production and help and take some responsibility as an assistant director and she welcomed this idea and I could believe her as an assistant director too.

BT-In your films you use language of filmmaking masterfully, please tell us
HS- I was very obsessed to maintain the tone of the movie and I knew that, frankly speaking, Shakib being seen as making a film within a film was not interesting to me at all. I never liked those kind of films! But I had no other choice and I must think of making a film with a story on the set of a movie production and it made me so worried. Though Shakib was the most important character for me of course, the other characters had a strong presence in the movie too, though it seems they are not seen that much. It made everything complicated and even more difficult while working with the Ladan character as I could not overlap her with the others, since she uses deaf & dumb language, and we have to see her image and it was critical to maintain the tone and language as well as the visual style of movie.

BT- How do you feel being chosen to represent Iran at the Oscars?
HS- Honestly, I have strange and complicated feelings! Of course, I have always thought of such an opportunity for my films as Oscar is the most important film event in the world and I am happy but I do wish this could happen at some other time, when my country’s people were happy and I could enjoy such success too. So, I have dual sense now and cannot express my feelings better.