Today is the birthday of one of the greatest actress of all times Sophia Loren! For many she is a just a beautiful woman and actress, but looking through her acting career you recognize her as an amazing artist. her performance as Cesira in Vittorio De Sica’s masterpiece, Two Women; Loren’s performance earned her the Academy Award for Best Actress in 1962 and made her the first artist to win an Oscar for a foreign-language film.

She holds the record for having earned six David di Donatello Awards for Best Actress: Two Women; Yesterday, Today and Tomorrow; Marriage Italian Style (for which she was nominated for a second Oscar); Sunflower; The Voyage; and A Special Day. She has also won a Grammy Award, five special Golden Globes, a BAFTA Award, a Laurel Award, the Volpi Cup for Best Actress at the Venice Film Festival, the Best Actress Award at the Cannes 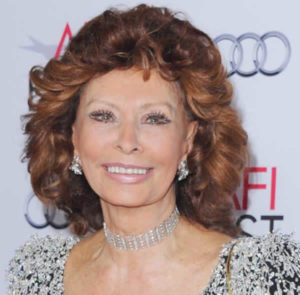 Film Festival, and the Honorary Academy Award in 1991. In 1995, she received the Cecil B. DeMille Award for lifetime achievements, one of many such awards. In 1999, Loren was acknowledged as one of the top 25 female American screen legends in the American Film Institute’s survey, AFI’s 100 Years…100 Stars.

Is there anyone who has not enjoyed her wonderful, funny character in The Gold of Naples!?