Oscar Live Action Short nominee, SKIN starts in a small supermarket in a blue-collar town, a black man smiles at a 10-year-old white boy across the checkout aisle. This innocuous moment sends two gangs into a ruthless war that ends with a shocking backlash.

Guy Nattiv, director of SKIN is an acclaimed filmmaker from Israel. His first American feature film, entitled “SKIN“, stars Jamie Bell and Vera Farmiga and premiered at the 2018 Toronto International Film Festival where it won the Fipresci Critic’s Prize. It will make its European premiere in 2019 at The Berlin International Film Festival and was acquired by A24 for distribution in late 2019. It is based on the true story of Bryon Widner, a notorious white supremacist who goes through extensive surgeries to remove Neo-Nazi tattoos on his face and hands in order to reform. The feature is derived from Nattiv’s acclaimed short film, also entitled “SKIN“, which won best short at Hollyshorts and the San Jose Film Festival. 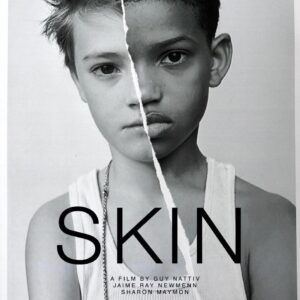 Before coming to the US, Nattiv directed several acclaimed features in Israel. His first film, “STRANGERS“, co-directed with Erez Tadmor, was in competition at the Sundance and Tribeca Film Festivals in 2008. The film was also based on his lauded short that won Sundance the previous year. It was short-listed for the Academy Awards and won over 20 festivals worldwide, including Locarno. His second feature, “THE FLOOD“, also based on a short of the same name, won a special prize at the Berlin Film Festival in 2012 and was nominated for six Israeli Academy Awards where it won Best Actor. His film “MAGIC MEN”, co-direcrted with Erez Tadmor, premiered at Palm Springs International Film Festival in 2013, and won Best Actor at the Israeli Academy Awards. The grandchild of Holocaust survivors, Nattiv is deeply fascinated by why and how hate takes hold of the human heart. Guy currently lives in Los Angeles with his wife/producing partner Jaime Ray Newman, and their daughter Alma.

Bijan Tehrani: How did you come up with the idea of Skin? Has the raise of the racism in US and the rest of the world anything to do with it?
Guy Nattiv: I moved to the States from Israel 4 and 1/2 years ago and I was looking for my first American project. I read an article in a newspaper about the former Neo-Nazi skinhead Bryon Widner who changed his beliefs and removed all the tattoos from his face and hands, enduring 25 excruciating surgeries. I was overwhelmed when I read this. So while I was writing the script based on this story I knew that I wanted to do a short before the feature in order to get the budget and the right actors as a proof of concept. I had also never worked with American actors or crew before. All my Israeli features were shorts before they were features. That was before Trump got elected and came into power. While I was doing the research for the feature I saw how the extreme right in America is getting stronger and scarier. There is a correlation between the short and the feature regarding the subject matter, but the narrative is different story.

BT: SKIN portrays a close to real image of the white supremacists, did you know a family in real life like the family in your film?
GN: While I was doing the research, I was exposed to ex-skin heads and white supremacists. During this time, these people came into focus for me as actual people. Men and women who loved their families, who came from very difficult backgrounds. They were more than an ideology, but actual human beings. And with the help of Bryon Widnor and Daryle Lamont Jenkins, a black activist who was crucial in getting Bryon out of the movement, they helped me. They are consulting producers on both films. They helped me understand how the backyard of America became the front yard.

BT: You manage to show how stupid the whole issue of color of the skin is. What has been your experience with the audiences of the Skin so far?
GN: The reaction has been powerful. People are shocked, and then after the ending seeps in, we’ve been lucky to have great debates. I see the importance of showing this to a younger audience because it is all about education and that is the meaning of the film.

BT: Both young kids in your film in a way look very similar, was this intentionally done?
GN: We made it clear to our wonderful casting director Jessica Sherman that we wanted the boys to be just at that murky time between being a little boy and being old enough to see the world for what it is. Both Lonnie Chavis and Jackson Robert Scott have a real innocence to them but a depth and knowingness behind their eyes. They were my first and only choices for the role. And they adored each other on set, we have video of them doing a break dance battle!

BT: Acting and casting in SKIN is superb, how did you go about casting your film and how did you work with the actors?
GN: Our casting director, Jessica Sherman, helped me cast the movie understanding that humanity and soul is something essential to all the characters. Especially when we talk about such a brutal story. I was so lucky to have an amazing collection of intelligent and powerful actors. Jonathan Tucker and Danielle Macdonald were brilliant as the racist family and their son Jackson was a surprising and emotional kid. On the other side, Shelley Francisco and Ashley Thomas gave a stunning and heartbreaking performance. Through their intelligence and talent SKIN is not only a tale about racism and the consequences of a hate crime it’s also a coming of age story that goes wrong. We had a lot of improv scenes, especially the breakfast scene from Jackson who brought the monologue about the snakes from a school project he had worked on. This monologue became the perfect allegory about what the film was about.

BT: What do you think about the chances of the Skin winning an Oscar?
GN: I’m taking it step by step right now. I am honored to be nominated and I can’t even think about a win. My mind won’t let me go there!

BT: Are you planning to make a feature film? Will social justice be subject of your next project ?
GN: The feature film about reformed Neo- Nazi, Bryon Widner was ready to go since 2016 but no one would finance it because while they thought the subject matter was important they felt it made people nervous to humanize people from the other side even in a story about redemption. So my wife and producing partner Jaime Ray Newman and I decided to take things into our own hands and make this short to show the ideas inside my head. The short is what ultimately got the feature film made. The feature, also entitled SKIN, just premiered at the Toronto film festival starring Jamie Bell, Vera Farmiga and Danielle Macdonald (who was in the short), where I was honored to receive the Firpesci Critics Prize.The amazing A24 and Voltage Pictures will release it around the world over the summer. It has been extraordinary to see this little short that took so much blood sweat and tears have a beautiful life of its own.