You are at:Home»CinéEqual»Farah Nabulsi talks about GoE Bridging the Borders Award winner, The Present

Farah Nabulsi director of The Present, the Palestinian film and winner of GoE Bridging The Borders Award at 2020 Palm Springs ShortFest International is a down to earth and fascinating person.  Farah Nabulsi is an activist young filmmaker that in The Present shows her power of use of language of cinema and her understanding of the world problem, the new colonialism.

This award is especially meaningful to me, as The Present is a film that I hope tears down stereotypes and misconceptions and builds bridges of empathy and understanding about a very sad and absurd reality that exists in Palestine today. This award tells me that you appreciated the art, the emotion and the meaning.
Thank you to each and every Jury member, regardless whether it was your favorite or not. The fact that you considered it, contemplated it and appreciated it is what matters most to me.

Thank you to Cinema Without Borders and of course to Go Energistics for sponsoring the award, (and so generously in tough times). You have helped a filmmaker move even closer to her goal of doing what director Alejandro Inarritu said cinema should do when he was on the Jury at Cannes: “Cinema must try and raise the global social consciousness.  Farah Nabulsi”

We had the opportunity of interviewing Farah Nabulsi about making of The Present on camera: 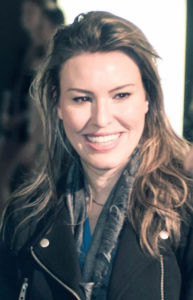 Farah Nabulsi is the daughter of a Palestinian mother and Palestinian-Egyptian father. Born and raised in London, she attended the Francis Holland School for girls and graduated at the Cass Business School. Before becoming a filmmaker, she received the CFA qualification and worked as a broker for many years. Farah Nabulsi decided to leave the business world after a trip to Palestine in 2013.

In 2016, she founded Native Liberty Productions, a not-for-profit media production company, that aims to re-humanize the Palestinians and draw attention to the injustices they face. She is also the founder of oceansofinjustice.com, an online educational platform with news from the Israeli-occupied territories.

Farah Nabulsi has been invited to screen her work and speak at various notable events including the United Nations Headquarters in New York where she addressed the delegates in the Trustee Chamber Council.