For those looking for social justice films and films about environment protection, there is a new streaming service: ECOSTREAMZ.

In these polarizing and often difficult times we currently live in, easy access to information about important environmental and societal issues is critical to raising awareness and ultimately improving the world around us. Yet, the mainstream media, only covers a fraction of the problems we face on a daily basis.

Through its strategic partnerships with some of the most well-known organizations and film festivals in the world, including the Jane Goodall Institute and the Wild and Scenic Film Festival, ECOSTREAMZ’ objective is to become THE clearinghouse of this information, organized in a way that is easy to navigate for concerned individuals.

In order to learn more about ECOSTREAMZ, we had a video interview with James N. Branchflower, Founder and CEO of the company.

James N. Branchflower is an artist, a businessman, a visionary, and the Founder and CEO of the documentary streaming company, ECOSTREAMZ. With a focus on raising consciousness for eco-social justice, his launch into film streaming has been nothing short of passion driven and a natural for this original filmmaker.

Through Branchflower’s leadership, as the proud host of prominent awardwinning films, ECOSTREAMZ has risen in notoriety as a quintessential go-to source featuring films that matter, touch the spirit, and make a difference. With an illustrious career in the arts, Branchflower began his professional journey as a painter. He later went on to own two advertising agencies which he sold following 15 years in the field. It wasn’t long after before he would enter into the world of films; a departure from advertising caused through a traumatic experience at a time when he realized he no longer wanted to remain in advertising. 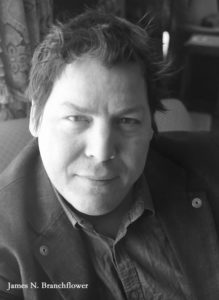 His works in film included writing and an attempt at producing; an endeavor borne by way of his production company, ECO FILMS. His first film, The Lion Inside, was an action tale about deforestation and the controversial bushmeat crisis in Western and Central Africa.

When funding proved challenging, Branchflower turned his experience as a filmmaker into value through his consultancy service – an effort to impact the documentary filmmaking market, including distribution of represented films. He soon determined the best way to get these films out in the public domain was to have a direct hand in controlling their output. Following his ECO FILMS venture, he joined forces with current business partner and renowned British conservationist, Ian Redmond. Together they ultimately formed ECOSTREAMZ.

An innovative cut above the rest daring to stream controversial documentaries as never seen before, ECOSTREAMZ is today recognized as a one-stop central station offering a collective mustsee informative platform. True to its mission statement in promoting and distributing films to the widest possible audience, Branchflower’s vision is a critical movement unto itself – awakening humanity with awe, wonder, and making a difference.

For Branchflower, his environmental and human rights-themed factual content is all about catering to the conservationist, the environmentalist, and the activist. An all-access streaming facilitator contributing to global sustenance.

According to Branchflower, “With films being an extremely persuasive tool helping to open people’s minds to real world issues, ECOSTREAMZ provides filmmakers an exclusive channel to have their stories seen and heard – getting their projects out to the public. These passionate auteurs have important messages to convey, whether inspirational or cautionary, about our world.”