“At the beginning, especially, it was difficult to convince foreign film makers that this area is a safe area, not just a place for political conflicts, war and the things that the mainstream media usually talk about,” said Program Manager Bina Qeredaxi of the week-long event that stretches from September 9-16.

Duhok city, a provincial capital in the Kurdistan Region, has hosted the festival since 2012. In 2014, the festival was canceled because of the war against ISIS. The event seeks to serve as a platform for cinema from all four parts of Kurdistan, the Kurdish diaspora, and to build connections between the Kurdish and world cinema industries.

The international version of the festival had a slow start in 2012. However, film communities around the world who know each other started sharing their opinions and recommendations for Duhok as an event venue.

It features full length, short, and documentary selections from both Kurdish and international cinema.

Now, Qeredaxi said, when Duhok invites producers, directors or actors, they are excited to come.

“When they come, they see the real image of this area,’ she said. “It’s a peaceful area; it has its own culture and its own art. Now it’s getting much better.”

Duhok IFF’s online registration receives more than 1,000 different submissions from all around the world every year now.

The Duhok IFF displays a logo of a golden grape leaf. 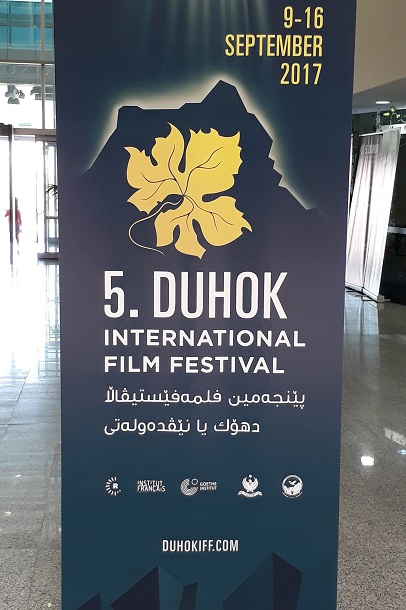 This logo represents the fall season in Duhok in which the IFF is held as well as the 140 varieties of grapes available in the area during this season.

The Kurdistan Region’s Peshmerga fighters have participated in a three-year long war against ISIS. Duhok and the Region’s three other provinces have hosted 1.8 million displaced Iraqis and Syrian refugees.

The festival’s Artistic Director Shamal Sabri explained the fifth edition in 2017 is “inspired by hope.”

One film producer, Celeste Alves from Portugal who screened ‘Ana-San’ on Sunday said when she was invited to come to Kurdistan, she was initially afraid so she started reading more about the Region and asking experienced visitors. “Everybody spoke very well about Kurdistan and I’m very happy to be here,” she said.

Alves explained she first thought the Kurdistan Region was more conservative but said it was a lot more modern than she had initially perceived it to be.

“But at the same time, you are very proud of your culture and this is amazing to see,” she added. “This is the best priority of this festival, which is to prove to European and American people that there is a different place here [in the Region]that we can show the world.” 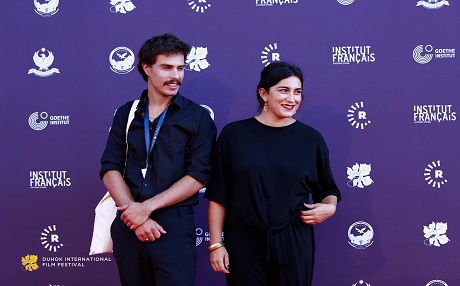 Celest Alves (right) who produced ‘Ana-San’ poses for a photo with a friend from Portugal at the film festival in Duhok.

Another film producer and director from Ireland, Frankie Fenton, whose documentary ‘It’s Not Yet Dark’ will be screened on Friday, said this was his first trip to the Middle East. Fenton was initially concerned about traveling to Kurdistan. After researching, he concluded it would be safe to come.

“I haven’t seen very much [of Kurdistan]but it’s been enormously welcoming and lovely and kind-hearted and I’m very, very privileged to be here,” said Fento, who arrived on Saturday.

In regard to local cinema, Qeredexi, the program manager, said that Kurdish film production has gone quite well in the past 10 years or so, but it has slowed in recent years.

“The economic crisis and all of the conflicts happening in the four parts of Kurdistan actually made film productions quite fewer than in previous years,” she said.

Qeredexi explained they are currently struggling to find the best Kurdish films and she hopes the industry will improve.
This year, Kurdish filmmakers submitted 110 works — of those just 43 were accepted for screening.

The fifth edition of Duhok IFF will also see the launch of the Nuhat program offering professional mentoring and training to aspiring Kurdish filmmakers. Two workshops on script writing and pitching ideas will be put on in cooperation with the Goethe-Institut Irak.