You are at:Home»Conversations»Doug Block talks about the 20th anniversary of the HOME PAGE

Today, Monday April 15th 2019, is the 20th anniversary of the first release of HOME PAGE, a film by documentary filmmaker, Doug Block. In 1996 Doug fascinated by this new thing called the internet, trains his wry, analytical lens on the burgeoning home page (i.e. blogging) phenomenon. He soon falls under the spell of 21-year old cyber superstar Justin Hall, whose literally bare-all online diary spares no details about friends, family, lovers and, inevitably, Block himself. When Hall goads the filmmaker into keeping his own online diary, the story takes an unexpectedly personal turn, with hilarious and deeply affecting results. This special 20th anniversary re-release confirms Home Page to be an astonishingly prescient historical document of our confession-crazed culture. It reintroduces the film that established Block as one of the foremost directors of the personal documentary form (51 Birch Street, The Kids Grow Up, 112 Weddings). And it highlights the birth of The D-Word (www.d-word.com), which has transformed over the past 20 years from Block’s personal blog into the internet’s foremost documentary community.

To learn more about HOME PAGE we had the opportunity of interviewing  Doug Block.

Bijan Tehrani: Please tell us how making of HOME PAGE happened, was it your fascination with a new era starting?
Doug Block: It was 1996 when I began shooting HOME PAGE and I was fascinated by this brand new thing called the internet. I sensed it was going to change the very nature of how we communicate as human beings. I wasn’t interested in the business side of it, and I didn’t care who was going to succeed in it or not. I wanted to find the people doing the most interesting stuff on the web, those pushing the boundaries of it as a medium. So I set out to explore it camera in hand, and all roads quickly led to this college kid named Justin Hall who was writing a very popular online diary called Justin’s Links From the Underground (www.links.net). As soon as I set eyes on him I realized I’d found my main character, someone who personified the beating heart of the internet. 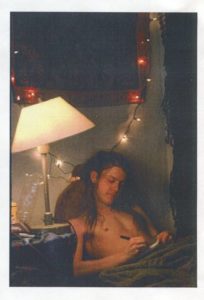 BT: Did you create the structure of the HOME PAGE in a script or you just created it in the process of making?
DB: I never pre-script a documentary. The structure of the story is always scripted in the editing room by me and the editor as we sift through the footage. I give all of my editors co-writing credit for just that reason. It’s an acknowledgement of their essential contribution to the story structure that goes beyond mere editing.

BT:  Please tell us about your encounter with Justin Hall
DB: Well, I’d heard so much about him in advance of meeting him, and he was such a fascinating, brilliant, controversial figure, so I was filled with anticipation. And then he opened the door and I saw this skinny kid with this cascade of hair and I knew right away that I’d found my story. He seemed to embody the wild, giddy, freewheeling early days of the internet. And history has proven me right, as he’s now acknowledged by no less than the New York Times as “the founding father of personal blogging.” It turned out that Justin is a figure of real historical importance.

BT: How HOME PAGE by critics and the audiences? (I assume you mean how was it received by critics and audiences?)
DB: The film premiered at Sundance in 1999 and there was a lot of excitement around it as the world was on the cusp of a new century. A lot of critics got behind the film, and no one more so than Roger Ebert, who was a huge proponent of the internet. He believed that HOME PAGE was groundbreaking and championed our revolutionary, multi-platform distribution effort. We were the first film to stream the film, show it in theaters and sell on home video simultaneously. I can’t say it was the smartest thing to do, but it definitely was groundbreaking.

As for audiences, the film was clearly way ahead of its time. I think what Justin was doing on his blog in terms of invading the privacy of those he wrote about was perceived by some as off-putting. Which is why it’s so fascinating to see HOME PAGE today from a vantage point of 20 years on. The culture has not only caught up with Justin, it’s left him in the dust. 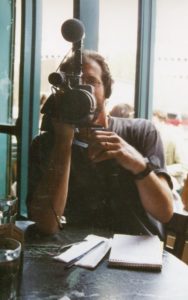 BT: When you watch HOME PAGE in its 20th year of birth, do you think you may have made it differently if you had your present life experience?
DB: I try to make films that are timeless and universal. So I’m very proud that, 20 years later, HOME PAGE not only stands up well as a story, but that its themes resonate even more strongly than they did at the time I made it. It’s a nostalgic time piece, for sure, but it’s also a prophetic look at where the internet was heading from the very beginning

BT: Please tell us how film fans could watch HOME PAGE?
DB: HOME PAGE will be available starting April 16th both on digital platforms and dvd in all English language territories worldwide. In North America, you can find it on iTunes here: https://itunes.apple.com/us/movie/home-page/id1457890337?ls=1 Otherwise, check the local iTunes in your region. On dvd, you can find it at Amazon here: https://www.amazon.com/Home-Page-Doug-Block/dp/6305720061

BT: Please tell us about your other films and your blog.
DB: I’ve produced and directed 5 features documentaries to date and am best known for making personal documentaries, of which Home Page was my first (others include 51 Birch Street, The Kids Grow Up and 112 Weddings). I also produce documentaries for other filmmakers, including Silverlake Life, Jupiter’s Wife and Resurrect Dead. You can check out all of my films at my website: www.DougBlock.com

The blog you’re referring to is The D-Word (www.d-word.com), which began as a blog I kept up for 3 years while making Home Page and focused on my experience making the film, then turned into a discussion forum and community for documentary professionals worldwide. Today it’s considered the foremost documentary community on the internet, with over 17,000 members from 130 countries, and it’s entirely free. So, not only is Home Page celebrating its 20th anniversary with a re-release, The D-Word is also celebrating its 20th year as a virtual community.

BT: What is your next project?
DB: I’m in the middle of filming Betty & Henri, in which I attempt to solve the mystery behind a 20-year old anonymous love letter that I discovered in a used travel book which had been sitting on my bookshelf at home for many years. It’s a fascinating romance and mystery wrapped inside of a detective story, and it’s all still unfolding. I have only their first names to go on, Betty and Henri, so I may well never find them. But it’s really about the search, not the destination.