You are at:Home»Cinema Tech»DIRECTV NOW, a great choice for film fans

In the last three years, since online live TV services started to have a serious presence in broadcasting market, we have tried to cover them for our visitors that have proved to be pioneers in the field of cord cutting. 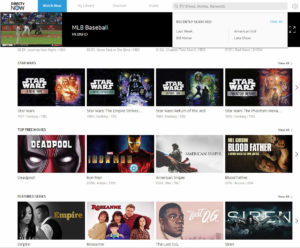 For a new series of live online TV coverage, we first conducted a survey among 165 visitors of Cinema Without Borders, we asked them about what they expect most from an online live tv provider. 32% of those that participated in our survey, picked streaming and picture quality, 28% the offering of a reliable cloud DVR, 18% a comprehensive and large library of free on demand movies and tv shows, 12% a good channel lineup that includes local networks and movie channels, 8% an easy to use interface and 2% had various other requests.

In the next step to find the best online is streaming live TV based on our visitors’ wishes, we had looked at sling TV, YouTube TV, Hulu TV, fubo TV, PlayStation Vue, and DIRECTV NOW. We checked these services on Windows browsers, iOS devices (4th generation of Apple TV, iPhone & iPad), Android platform (A Sony Tablet and a Galaxy phone), Amazon Fire TV 4K, Roku devices (Roku 3 and Roku TV) and Sony Playstation. When we were conducting the first phase of our tests, we invited to filmmaker’s visitors, Amy Award winners, to comment on the providers we were reviewing. They both confirmed the findings of our test team that DIRECTTV NOW offers the best quality picture and the smoothest streaming among all, top two priority of our visitors and our two filmmakers guests. Of course, the main concerns about DIRECTTV NOW at the time of the test were the lack of a Cloud DVR, interface problem issues and limitation of number of simultaneous streaming in 2. We knew about what DIRECTTV NOW was offering through its beta program, but we do not like to base our judgement on an in-test version of DIRECTTV NOW. 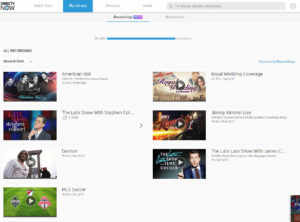 Fortunately, we did not have to wait long as last week DIRECTTV NOW released its new version for Windows browsers and ios devices, promising to release the update for other platforms in coming weeks.

Now Cloud DVR has been added to DIRECTTV NOW, as well as a third stream for $5 extra and its interface has considerably improved. We will review these features in deep in a future article.

As far as simultaneous streaming, right now Sling TV offers between one to four, YouTube TV allows three, fubo TV two to three, HULU for an additional $15 allows unlimited streams at home network, plus 3 mobile devices outside home, and Sony PlayStation Vue one to five (with location restrictions).

Examining all the factors set by our visitors, we came up to the conclusion that the main provider we cover in the next coming twelve months will be DIRECTTV NOW, because of its picture quality, and its high-quality of a streaming, almost no glitches, only minor buffering that we encountered no more than once a day. On top of that we should mention huge number of on-demand content including hundreds of good movies. Of course the new version of DIRECTTV NOW has answered are main concerns about their services.

In upcoming articles, we will review the new version and check it out on all available devices and address its pros and cons and propose what could improve DIRECTTV NOW an ideal place to watch movies and TV shows for our audience.