Reza Kamrani is an Iranian photographer that lives in city pf Tehran.

Reza Kamrani was born and grew up in Kerman, one of the cities on the edge of the central desert in Iran. Naturally, he was influenced by his surroundings and by studying the architectural functions in each Climate Kamrani realized that desert architecture is a very clever answer to the needs of patient and hardworking desert people, allowing them to have better life in spite of the harsh nature around them.

While studying cinematography at the School of Television and Cinema, with the guidance of his teachers such as late Doctor Shokrolah Manzour, Reza Kamrani got to understand the importance of Iranian gardens built in the desert and whole desert architecture. All that lead him to start taking photos of these desert treasure.
I asked Reza Kamrani , what did encouraged him to become a photographer: 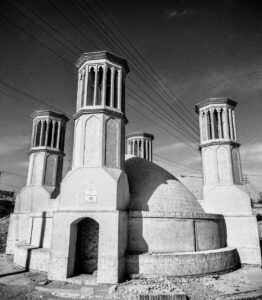 “Basically, every artist must choose one of the artistic mediums such as painting, writing, music and other arts to express their feelings. I was subconsciously drawn to this path. I looked at photography beyond taking family pictures. Of course, my desire to travel, observe and record the beauties of our world played a part for me to become a photographer. What distinguishes a photo from dozens of similar photos is the angle that a photographer looks at a subject and the picking the right moment, which means that you must choose the best angle and moment among infinite number of angles and moments available to you.

The most important elements of a photo, in addition to physical conditions such as adjusting the contrast, shutter speed and composition, is blowing the spirit of love into a photo, that certainly comes from the taste and feelings of the photographer. In the desert photography, harmony of the architectural forms, such as domes and arcs play the most important part and, in an environment, that the dominant color is gray or brown, the ceramic work and architectural ornaments stand out.”