You are at:Home»Feature Story»A conversation with  Ruben Östlund about Swedish Oscar selection THE SQUARE

The Square, directed by Ruben Östlund, is the Swedish selection for the Best Foreign Language Film Oscar.

Here at Cinema Without Borders we agree with most of the world cinema film critics that The Square has a good chance to be among the final five nominees for the Best Foreign Language Film Oscar.

The Square tells the story of Christian, a respected curator of a contemporary art museum, a divorced but devoted father of two who drives an electric car and supports good causes. His next show is “The Square”, an installation which invites passersby to altruism, reminding them of their role as responsible fellow human beings. But sometimes, it is difficult to live up to your own ideals: Christian’s foolish response to the theft of his phone drags him into shameful situations. Meanwhile, the museum’s PR agency has created an unexpected campaign for ”The Square”. The response is overblown and sends Christian, as well as the museum, into an existential crisis.

Two days ago we had the opportunity of having an interview with Ruben Östlund, director of The Square that is included in the video below:

Ruben Östlund says: “THE SQUARE calls for a naturalistic and intimate style of acting. The loving relationship between Christian and his cheerleading daughters forms the emotional core of the film and shows, through concrete images, the idea of a quest for utopia. Indeed, the girls are united in a very efficient collective effort where every one of the individuals performing together plays an equally important part in the achievement. It is also a visual demonstration of the importance of trust to see a 10-year-old girl dive into a salto, trusting that the others will catch her. The cheerleader’s focus and joy illustrates the best part of American society, a “team player effect” resulting from every American’s distrust of the State, perhaps?

THE SQUARE tries to address this urgent question in a light-hearted, absurdist manner. The obviously fake YouTube clip created by the PR specialists to promote the exhibit’s moral stand exemplifies how media is a part of the way we look at the world and misunderstand it. I find it essential to analyze its effects, because I am convinced that moving images are the most powerful means of expression we have ever had, and thus more dangerous than ever. At the same time, film can provide us with exceptional access to the world: there are so many things we haven’t actually done ourselves, but we have experienced them in our minds through films.
Films can for instance enhance a critical way of thinking about the conventions and what we take for granted. I am thrilled when someone tells me they have been discussing my film all night with friends, because then my film has initiated change outside of the cinema theatre.” 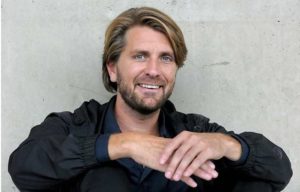 RUBEN ÖSTLUND
Ruben Östlund was born in 1974 in Styrsö, a small island on the West Coast of Sweden. He studied graphic design before enrolling at the University of Gothenburg, where he met Erik Hemmendorff with whom he later founded Plattform Produktion. An avid skier, Östlund directed three ski films, alluding to his taste for long sequence shots, a taste he structured and developed throughout his film studies and which to this day remains an important trademark of his work.
Ruben has become well known for his humorous and accurate portrayal of human social behaviour, as well as for his renowned used of Photoshop and other forms of image-processing software in his films. His feature debut THE GUITAR MONGOLOID, won the FIPRESCI Award at Moscow in 2005. His second feature, INVOLUNTARY, produced by the co-founder of Plattform Produktion, Erik Hemmendorff premiered in Cannes Un Certain regard 2008. The film was then distributed in more than 20 countries and shown at numerous festivals, awarding Ruben international recognition.

Two years later, he won the Golden Bear in Berlin for INCIDENT BY A BANK, a short film in which every camera movement was computer generated in post-production. The premiere of his third feature film PLAY (2011) was held in Cannes at the Director’s Fortnight, where he was awarded the ‘Coup de cœur’ Prize. After Cannes, PLAY was shown in Venice and Toronto as well as numerous other festivals where it received additional prizes and distinctions: among others, PLAY was nominated for the prestigious LUX prize of the European Parliamant and won the Nordic Prize, the highest distinction in Scandinavia. His fourth feature film, FORCE MAJEURE, premiered at Un Certain Regard in Cannes, where it was awarded the Jury Prize. The film was selected in countless festivals and won 16 Best Foreign film awards. FORCE MAJEURE was also nominated at the Golden Globes and shortlisted for an Oscar®. The film has been distributed in over 70 countries.

THE SQUARE is the fourth of Östlund’s films to premiere in Cannes and his first feature to be selected to win the Palme d’Or.