You are at:Home»Conversations»An interview with Claudia Castello, the editor of Hulu’s PREY

Prey is a Hulu original action/sci-fi movie and a prequel to the movies in the Predator franchise. Set 300 years in the past, this Predator origin story tells the tale of the very first alien encounter, threatening the lives of the Comanche Nation.

Before there was Dutch (Arnold Schwarzenegger), there was Naru (Amber Midthunder)—a skilled and resourceful warrior leading the fight against a high-tech predator—leaving her no other choice but to hunt…or be hunted.

The following is an interview with Claudia Castello, the Editor of the PREY

Bijan Tehrani: How did you start as a film editor and what attracted you to this career? 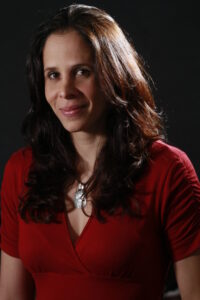 Claudia Castello: When I finished my undergrad in Journalism in Brazil in 2002 I came to the US to learn English and it took me a while. So in the meantime I took a few broadcast and film related classes at different community colleges. After a few years, I had the opportunity to work as an assistant to the Executive producer at a Brazilian based commercial production company in Venice, CA. They needed a Portuguese and Spanish speaking person to fill a position and it was perfect for me.

Working at Film Planet, I started putting together the in-house director’s reels and I got interested in doing that and started learning more about Final Cut by myself.

A good friend of mine who is now the founder and director of the Brazilian Hollywood Film Festival, Talize Sayegh asked me if I knew a Portuguese speaking filmmaker to edit her first short movie. I said I could be that editor, even though I had no clue of how to put a scene together. But I was so lucky that the director Allan Fiterman, now a director at Globo TV in Brazil, became my friend and had all the patience to walk me through that process. That is when I found out I really liked editing. Allan was a professor at NYFA (New York Film Academy) in LA and was able to get me an editing program scholarship. After I finished the intensive course, I needed more. I realized that to be a good editor, I had to understand the whole process of filmmaking. That is when I applied for my MFI in film production at USC. Another dear writer/director friend and mentor, Matthew Kohnen guided me throughout my application process and encouraged me to always keep going forward during the most challenging times of the program. There, I had the opportunity to meet amazing professors and colleagues. On my second year, Ryan Coogler was the student who caught my attention the most. So I approached him, he liked my work and we started collaborating on our first Short “Fig”, which did really well on the festival circuit. Then we did “Fruitvale Station”, then “Creed” and then “Black Panther”.

BT: Please tell us about your collaboration with Ryan Coogler?
CC: From day one I met Ryan I had the feeling that he was a special artist and human being. First I saw a scene he directed and then I knew I had to meet and work with him. And I was reciprocated, he also wanted to work with me. He chose me to edit “Fig”, a short that did really well in the festival circuit and then we worked together for the next seven years. The collaboration was very genuine, raw, we were best friends in the editing room. Michael P. Shawver was part of a solid triangle which worked like magic for many years.

BT: What has been the most challenging project that you have worked on?
CC: “Sergio” (2020) was a challenging one that I have close to my heart. Directed by the former war journalist Greg Barker who had previously directed a documentary with the same name “Sergio”(2009), about the Brazilian diplomat Sergio Vieira de Melo when he was in between life and death in the aftermath followed by the UN Headquarter attack in Iraq in 2003.

“Sergio” had a very challenging structure that we kept changing and improving until after the “official picture lock”. I feel like that movie wasn’t marketed the right way and the ratings weren’t great because the audience was expecting to know more about Sergio’s career, but that movie had already been done. That story was told in the 2009 documentary “Sergio”. Which is a very special documentary that tells about Sergio’s honorable career at the UN.

The film I edited had parallel timelines about his personal family life, his love life and the struggle after the UN Headquarter was bombed. It has to be watched after watching the documentary.

BT: Please tell us about your recent involvement in HULU’s PREY.
CC: It was a very special project to me because it was a Predator movie and I love the franchise and also, because the main character is a young female Comanche, who faces the challenges of establishing herself as a hunter, a non-traditional role in her society. It combined two elements that I knew would have an impact on the audience. The audience today is eager for new representation in every genre. Having an indigenous female lead in a Predator movie was a must!

So weeks before production, my 1st assistant and additional editor Alex Oppenheimer, the producer/post sup Ben Rosenblatt and I started personally calling and interviewing every person we’d bring into the editing team. I wanted to be involved from the get go and made sure we had a machine that worked efficiently, creatively and happily throughout the project. So that when Dan came to cut, everything was moving smoothly. We had an A team editing department including the in house VFX, led by Ben Howdeshell which made our work so much easier.

BT: As a Brazilian artist living in El Salvador, how do you see the state of Latin American Cinema?
CC: Yes, I’ve been spending most of my time lately in El Salvador where I identify with the culture and lifestyle. Recently, I have been included in discussions about developing a movie industry here. The government along with Salvadorian filmmakers are planning an entertainment cluster under a triple helix Concept: Government, Private Sector and Academy. They want to train more actors, producers, directors and below the line personal to start producing more content here. It’s exciting to see this effort because this country has a lot of talent and history.

Brazil has been going through economic and political difficulties that have been affecting the movie industry and culture in general. I hope this changes in a near future.