You are at:Home»Film Reviews»How can you even imagine his sufferings?, a look at “My Brother Khosro”

“My Brother, Khosro”, an intelligent movie, deals with a pain, a pain that without any pessimistic approach is part of a pain of a family that one of its members has a mental problem. Understanding, reactions and problems of the family members with this issue, has consequences that just knowing of it melts anyone’s heart.
* 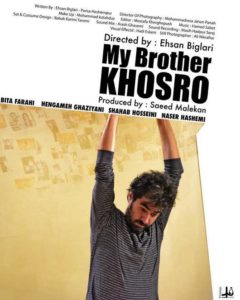 The older brother of Khosro, Nasser, has a cliche life style and has made an ivory tower for himself from traditional social rules. Nasser and his wife are both dentists, his wife is in the last months of her second pregnancy. Their first child, a boy, that has been raised in the same clean-cut style of living plays piano and Nasser is just so proud of it.

Shahab Hosseini plays Khosro, the second child of the family is bipolar and lives with her only sister in another city. The sister has spent all her life taking care of Khosro, but due to an emergency she is forced to travel and leave Khosro to stay with her other brother, Nasser…a man that in social clichés is considered successful.

And this is Khosro   that his behavior and actions falls his brother’s life apart and…
*
“My Brother Khosrow’s plot challenges the audience to think what should be done with such kind of problems? The outcome is that only treating these kinds of patients with love will allow you to take care of them and such a sad destiny expects those that end up in mental hospitals or nursing homes.

Understating Khosro is quite easy. Growing up by unloving treatment of his father and at the same time father’s extreme attention to Nasser, Khosro is completely lost. All this has happened because his ambitions in life is not in line with his father’s expectations. Khosro is interested in music and photography, interests that does not satisfy his father. As a result, feeling of futility and lack of self-confidence explodes in Khosro and leads him to having bipolar disorder. A family picture on Khosrow’s wall, with picture of his father and older brother cut out of it, shows his hatred towards his father and brother.

You understand and accept the coming tragedy and you understand Nasser’s actions when he gives sleeping drug to his brother and eventually straps him to the bed. 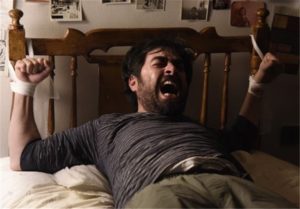 And it’s shocking when in the final sequence of the film we learn that all this scene is recorded by Khosro’s mobile phone…..Khosro knows and understands everything and as an audience you are left with a big question in your mind.

A very powerful screenplay, Shahab Hosseini’s amazing performance and a camera work that without enforcing itself on the audience using uncommon angles, portrays Khosro’s mental conflicts. Lighting, make up, costume design, set design with no exaggeration are completely at the service of revealing the big problem the film is about.

Children performances were weak like most of our other films.

I loved the Mise-en-scène and the rhythm of the film.

I wanted to see this film on the large screen, but as I lost the opportunity, I watched the DVD of it tonight and I conclude that the hidden charm of the film gave me the same pleasure as if I have watched it on a theater screen.

This is a very important and effective movie.

How can you even imagine his sufferings?