You are at:Home»Bridging The Border Award

At a time when physical, religious, racial, cultural, and economic borders divide the population of our planet, efforts to bridge those borders should be appreciated. In that spirit, Cinema Without Borders presents MOZAIK Bridging the Borders Award,  to the films that are most successful in bridging and connecting the people of our world closer together.

Burbank, Ca — April 1, 2021 — At Cinema Without Borders, we are thrilled to announce MOZAIK as the new sponsor of our Bridging The Borders Award.  The humanistic goals of MOZAIK, their broad vision of how people of our world should come together, and their understanding of how the art of filmmaking bridges over invisible borders, makes them the perfect match for the Bridging The Borders Award.

“The idea behind the Award has been to connect people across the globe through the power of film, which has made it a great success during its fourteen years of highlighting films in several local and international festivals,” said Bijan Tehrani, Editor in Chief of Cinema Without Borders. “Receiving heartwarming words from great filmmakers and winners of the Bridging The Borders Award—such as the late Andrzej Wajda, the legendary Polish filmmaker Ari Folman who directed Waltz with Bashir, the Finnish director Klaus Haro, and many others—has encouraged us to look for a brighter, more inclusive future, and that is why we are enthusiastic about our partnership with MOZAIK.”

“Year after year, filmmakers from around the globe capture through their lenses stories that are deeply rooted in the ideals of justice, human rights, and everyday empathy for our fellow neighbors, both near and far. The Bridging The Borders Award celebrates this form of authentic cinema where viewers find solidarity in the universality of human experience, and, in turn, are moved to meaningful action to address some of the greatest global struggles of our time, ” said Keely Badger, Executive Director of MOZAIK Philanthropy.

The winner of the MOZAIK Bridging the Borders Award at each festival receives a media recognition spotlights across print and digital platforms.

At a time when physical, religious, racial, cultural, and economic borders divide the population of our planet, efforts to bridge those borders should be appreciated. In that spirit, Cinema Without Borders presents Bridging the Borders Award to the films that are most successful in bridging and connecting the people of our world closer together.

KEELY BADGER, Executive Director of MOZAIK Philanthropy
Keely Badger is a millennial multidisciplinary expert and advocate on international human rights and development issues. Her work centers at the intersection of restorative justice, movement-building, new media, and the emerging legal precedent on the human right to know the truth. Her unique expertise champions durable solutions for underrepresented voices, communities and causes, by working with leading philanthropists, brands, and content creators to catalyze storytelling as a tool for peacemaking. Keely holds a B.A. from the University of San Diego in Cultural Anthropology & Political Science, an M.A. from Dartmouth College in Globalization Studies, and an MSt. in International Human Rights Law from University of Oxford. She is a 2019 graduate of the Rockwood Leadership Institute.

Films nominated or considered for an OSCAR or other major awards after winning Bridging The Borders Award:

Ave Maria from Palestine; Directed by Basil Khalil. winner of Bridging The Borders Award at 2015 Palm Springs ShortFest later in 2016 was nominated for the Live Action Short Film Oscar.

Walesa. Man of Hope, directed by legendary Andrzej Wajda, won Bridging The Borders Award in 2014 at the Palm Springs International Film Festival and later was announced as the Polish entry for the Best Foreign Language Film at the 86th Academy Awards.

The Band’s Visit  won Bridging the Borders Award in 2008. This film was Israel’s original Foreign Language Film submission for the 80th Academy Awards, but was rejected by the Academy of Motion Picture Arts and Sciences because it contained over 50% English dialogue. It has won Un Certain Regard – Jury Coup de Coeur – Cannes Film Festival  and Feature Film Award – Montreal Film Festival.

French from France, directed by Josza Anjembe won 2016 l Bridging the Borders Award 2016 in Palm Springs ShortFest and now by winning other awards in 2017, will be considered for an Oscar in Live Action Short section.

A letter from Darryl Macdonald,  president of Palm Springs Film Society and International Festivals about Bridging the Borders Award 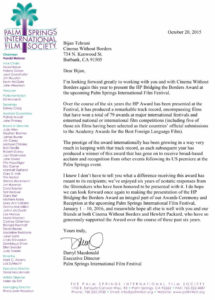 Dear Bijan,
I’m looking forward greatly to working with you and with Cinema Without Borders again this year to present the HP Bridging the Borders Award at the upcoming Palm Springs International Film Festival.
Over the course of the six years the HP Award has been presented at the Festival, it has produced a remarkable track record, encompassing films that have won a total of 79 awards at major international festivals and esteemed national or international film competitions (including five of those six films having been selected as their countries’ official submissions to the Academy Awards for the Best Foreign Language Film).
The prestige of the award internationally has been growing in a way very much in keeping with that track record, as each subsequent year has produced a winner of this award that has gone on to receive broad-based acclaim and recognition from other events following its US premiere at the Palm Springs event.
I know I don’t have to tell you what a difference receiving this award has meant to its recipients; we’ve enjoyed six years of ecstatic responses from the filmmakers who have been honored to be presented with it. I do hope
we can look forward once again to making the presentation of the HP Bridging the Borders Award an integral part of our Awards Ceremony and Reception at the upcoming Palm Springs International Film Festival, January 1 – 10, 2016, and meanwhile hope all else is well with you and our friends at both Cinema Without Borders and Hewlett Packard, who have so generously supported the Award over the course of these past six years.
Yours truly,
Darryl Macdonald
Executive Director
Palm Springs International Film Festival

“Dear Jury of Bridging The Borders Award 2014, Dear Audience, The Award bestowed on my film WAŁĘSA:  MAN OF HOPE touched me deeply, not only because it is my Film, but more so because of Lech Wałęsa, about whom I present on the screen. His accomplishment will be remembered not only in the history of Poland but also for its impact worldwide.  The fact that this was done by a Polish worker is even more remarkable. I am really sorry that I cannot be with you in person to receive this distinguished Award, but my current health condition precludes such a long trip. Please accept my sincere thanks for that Award. The WAŁĘSA film was created with the hope of bringing closer together people who love freedom.  Andrzej Wajda—Warsaw, 01-11-2014″

A Selective History of Bridging The Borders Award

Looking back at Palm Springs ShortFest 2007