Many Czechs head to cinema to see the long-awaited new motion picture by popular and critically acclaimed father & son duo Zdeněk (*1936) and Jan Svěrák (*1965). However the responses are very differents.

Director Jan Svěrák studied documentary at the Film and TV School of Academy of Performing Arts in Prague (FAMU). He even got the Student Academy Award for his 20 minutes long mockumentary Oil Gobblers in 1988. Nevertheless, he is better known for successful collaboration with his father screenwriter Zdeněk Svěrák which led in 1997 to the Academy Award for Best Foreign Language Film for their Kolya. 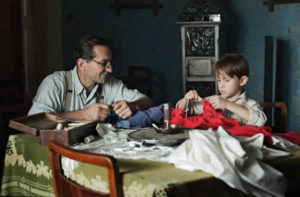 The newest movie Barefoot is a prequel to their very first Elementary School from 1991 – a comedy about growing up in the euphoric years between the end of WWII and the rise of communism in Czechoslovakia. The script to Elementary school was heavily influenced by both Zdeněk Svěrák’s youth and his career as a teacher. However, Barefoot goes even further, keeping only basic characteristic of Souček family, it features various memories and anecdotes from Svěrák’s childhood set during the WWII. The form itself is a big surprise for Svěrák’s fans. Previously, he was known as one of the biggest “mathematicians” of the Czech cinema. For his ability of building the structure of the story, he and his script to Kolya was given as an example to Czech students of film-making.

The plot itself isn’t very complicated or dramatic. Little Eda Souček and his parents are forced to leave their Prague apartment due to disagreement with the Nazi regime. The comfort of the capital city is replaced by his father’s native farm, now falling apart, in debt and full of unknown relatives. Eda’s childish father (Ondřej Vetchý) quickly embraces new role of villager, making experiments in plumbing or beekeeping, that very often end up in a disaster. On the other hand Eda’s beautiful and kind mother (Tereza Voříšková) clearly disapprove of the new hierarchy and ongoing disputes in her husband’s family. However, Eda’s eyes can’t truly see the evil around. He mostly spends his days on adventures with local “boy gang”. He also notices girls for the first time. And many more charming events creating the mosaic of Svěrák’s very own childhood. 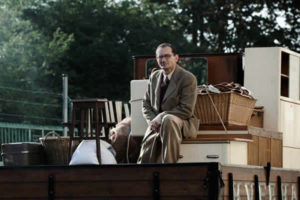 The film doesn’t really show much of a chain of events, but rather isolated memories, just as our brain. Sadly, those are often not very smoothly linked. But if you’re prepared to accept this as author’s creative decision, you can fully enjoy the nostalgic journey to Zdeněk Svěrák’s youth. The feeling of nostalgia is also created thanks to amazing work of director of camera Vladimír Smutný, who is already few years part of Jan Svěrák’s team. I must admit, that the movie counts on the effect it should have on viewer’s emotions, but not really in the cheap tear-jerker way. Although the movie might not become part of Czech classics and it doesn’t have the same qualities as some of Svěrák’s previous works, it still is one of the best movies shot this year in Czechia.