Once a friend asked me how come that what ever movie or play you pick to see turns out to be good!
I told him that first of all I am quite picky when it comes to see a work of art and secondly I admire all kinds of artistic activities because I understand the challenges of working in this field.
***
I always go to see Mohamad Rahmanian’s work of art, as I believe he is a genius when it comes to theater and his approach to art is quite unique.

Three weeks ago there were ten of us to go and see Rahmanian’s latest work, but then I was the only one that could not go. My friends loved the show and that made me even more eager to go to the theater. Eventually I managed to see this sold out show, when a friend of mine called me and invited me to see the show. And I can tell you that leaving the theater I was simply fascinated.

The Infinity Mirrors (Ayeneh haye rooberoo) is written by the great man of Iranian theater and cinema, Bahram Beyzai. The story starts when during the chaotic days prior to the Iranian revolution the angry mob burns down the red district of Tehran. The miserable prostitutes escape to the streets of the city. Whatever did we know about what was going on with those poor folks?

The play is the story and a flash back of one of the prostitutes and her very first words unveils a bitter fact: “Yesterday’s customers are today’s religious fanatics!”just this phrase is the interpretation of society that is changing to adapt itself on surface to the new rules…and that’s the miserable destiny that we had to suffer from all through the years after the revolution. 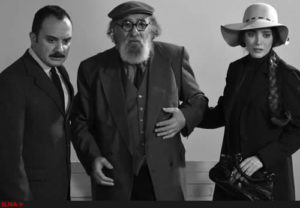 Behnoush Tabatabaei uses her great performance to share you all the way in a pain called life. A young girl from an educated family in return for release of her brother from jail is forced to sleep with a General and this leads into putting her in a shameful position and at the end her brother ends up in front of fire squad. The corruption that existed before and still…..

Getting into the sad life of the girl, love casts a light to enlighten your soul, as she says “ Why I did not know that someone loves me?!”

Performances of Roeya Teymourian, Habib Rezaei and the rest are excellent, really excellent
Without any hesitation acting is in its best and custom design, set design, lighting, that are at the service of the story, not only don’t bother you, but add to your enjoyment from watching the show.

Blending elements of Cinema and theater in such a creative way could only be done by Mohamad Rahmanian.

And it’s mind blowing that in those chaotic days that our generation remembers them well what we were engaged in thinking and what “Beyzai” was concerned with, thank you

Infinity Mirrors is based on a true story, masterfully executed by Rahmanian from a story from Bahrain Beyzai