Bahman Maghsoudlou is a one-man encyclopedia of pre-Iranian revolution cinema of Iran. He’s been there and done everything: author, director, producer, film critic, film scholar, entrepreneur. His documentaries on Abbas Kiarostami (Abbas Kiarostami, A Report, 2013), Bahram Beyzaie (Bahram Beyzaie, A Mosaic of Metaphors, 2019) and Dariush Mehrjuie (Daryush Mehrjui: The Dazzling Cow, 2022) are the most revealing and informative documentaries on these renowned Iranian film makers that I have seen. Maghsoudlou’s Razor’s Edge: The Legacy of Iranian Actresses (2016), a comprehensive and deeply affecting portrait of Iranian actresses before the Iranian revolution, is a must-see for anyone interested in the history of Iranian cinema. I talked to him about his work and his life.

How did you start your cultural activities in Iran?
I was an avid reader from early childhood, devouring any books and magazines that I could find. There was a cinema next door to our school whose manager was a friend of my uncle, and he used to take me there regularly to see films. I started writing film reviews when I was 15. In high school together with my cousin we wrote two books. One was the first encyclopedia in Iran which was published in 1964. The other book was 333 Prominent Figures which gave brief introductions to life and works of 333 people from Iran and rest of the world known in various fields of art, philosophy and science. This was published in three volumes in 1965. It was a big success and very quickly sold out. In 1970 I wrote a review of Luis Bunuel’s Tristana which was published in Roshanfekr (The Intellectual) magazine in Iran. I received a call from the secretary of the magazine’s owner saying he wanted to see me. I went to his office full of nerves. He asked me if I wrote the review myself and I said yes. He then offered me the post of Arts & Culture Editor at his magazine. I put together a team, some of whom later became well-known in various branches of arts and culture. After a year I became editor of the Setareh Cinema (Cinema Star) magazine. This was in 1971 and the same year I also started producing programs for Iranian television. I made my first documentary for TV on the Iranian artist, Ardeshir Mohasses. In 1974 I began producing a program on cinema for TV, called Images and Shadows. My guests on this program included William Wyler, Frank Capra, and other well-known film makers who were visiting Iran. I had Krzysztof Zanussi as a guest on a program I made about Polish cinema.

Do you still have video copies of these programs?
Yes I do, when I left Iran for USA to study cinema, I managed to bring these with me. I hope to convert them to digital soon and available for streaming. I went back briefly to Iran in 1976 and wrote about cinema in the daily papers, including interviews with Andrew Sarris, Nicholas Ray, Paul Mazursky, Otto Preminger. I was then asked by Iranian TV to produce a cinema related program when I went back to the States. Back in the USA I produced a ten-part program on great film makers for which I enlisted the help of renowned film critics and historians. Andrew Sarris wrote the parts on Ford, Hitchcock, Hawks; Antonin Liehm the part on Milos Forman, John Simon the part on Jean Renoir. I completed the program in August 1978. The program was narrated by Iranian actress Shohreh Aghdashloo. The first part, on Hawks, was shown but after that the TV staff went on strike and the Iranian Revolution took place. It took me 40 years to manage to get copies of this program out of Iran.

What did you do in the US after the Iranian Revolution?
I studied cinema studies in City University of New York. The cinema department was headed by Gerald Mast, the author of A Short History of the Movies. He visited Iran in 1977 at my invitation to head the jury for the Super 8 Film Festival. He later became head of cinema studies at the University of Chicago and sadly died quite young. Another one of my professors was Richard Barsam, author of Looking at Movies. After gaining a BA and MA there in 1980, I applied and was accepted on the PhD program on cinema studies in Columbia University. My professor was Andrew Sarris. Later I became his assistant. Another professor was John Belton (author of American Cinema, American Culture). After that I hired a movie theatre on 57th and Broadway in New York and organized the first Iranian Film Festival and Andrew Sarris wrote about it in Village Voice. I then brought Iranian movies to US and distributed them to various states for screening. I opened a video store in Manhattan in 1982, at the onset of home video. Very few titles were available then on video. I tried to be different to other video stores and stocked videos of foreign art films, documentaries, silent films, and classic movies. My customers included universities, advertising companies, as well as film lovers. Madonna visited my store and bought Seven Sinners (Tay Garnett, 1940) with Marlene Dietrich for her own birthday. My video store became well known and was written about in the local papers. Sydney Pollack became a friend and once asked me if I had any movies by “this Greek director who people talk about his camera movements” (Theo Angelopoulos). I also gave him some videos from the classic cinema of Egypt, which he liked. I stocked videos that you couldn’t find in other stores. A Saudi prince, whenever visiting New York would call me to his suite at Waldorf Astoria and I would take a suitcase packed with videos! That’s how I made my money. In 1987 I wrote the book Iranian Cinema, Sarris wrote its introduction, and was published by New York University.

Another highly valuable work of yours is Razor’s Edge: The Legacy of Iranian Actresses (2016). It’s the only film which documents the actresses in pre-revolution Iranian cinema. 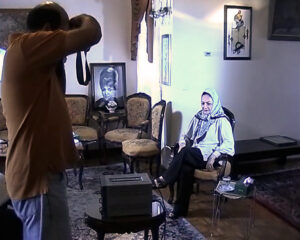 Apart from that I showed their true worth and high place in the cinema. Some people who used to look down at these actresses from a high moral platform as cheap women, were crying at the screenings and saying how sorry they were. This film affected men in particular and was seen by international audiences in various film festivals. It delves into these actresses’ lives, and in addition to their biography and their contribution to Iranian cinema, examines them in the context of the socio-political history of Iran from the formation of the constitution to the revolution, and their place in the history of Iranian cinema. Sadly, many of the people that I have interviewed in my documentaries are no longer alive.

You also produced movies in USA, one starring Anthony Quinn (Seven Sevants, 1996) and another directed by the famed Iranian director Amir Naderi (Manhattan by Numbers, 1993).
Amir Naderi used to live in my house in New York before the revolution when he was making Made in Iran (1978) there. After the revolution he returned to Iran. One day I was in my office in New York and Naderi turned up with an airline bag, having flown from Australia where he was attending a film festival. He told me that he had left Iran for good and asked me to produce his next film. I spent around $50,000 on pre-production of a movie he wanted to make called Tenth Symphony. He did some filming in “John Ford country” in Arizona and I estimated that around two million dollars was needed to make that movie. I had discussions with Martin Scorsese but we couldn’t raise the money and Naderi told me that he can make Manhattan by Numbers in New York for $200,000. I told him that since I don’t like his script, I won’t produce the film, but will put up some of my own money and find other investors. I agreed to put up $80,000 and found two investors to put up the rest. Those two withdrew later and I ended up investing $500,000 in that film. I met Anthony Quinn in New York and we became friends. A friend of mine had written a script which I showed to Quinn and he agreed to play in the film. Seven Servants was the closing film at Locarno Film Festival and was shown in the Grand Piazza. I got Gato Barbieri to write the music for both this film and Manhattan by Numbers. These will all be detailed in my memoirs which I am writing at the moment.

When did you make the Kiarostami documentary? 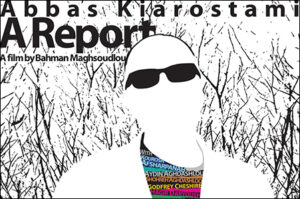 The film examines them in the context of the socio-political history of Iran from the formation of the constitution to the revolution…. Sadly, many of the people that I have interviewed in my documentaries are no longer alive.
That has an interesting story. Kiarostami was very reluctant to give interviews to anyone. In 2002 I interviewed over a hundred people in Iran, Europe, and USA who had been involved in pre-revolutionary Iranian cinema: directors, writers, critics, etc. I also asked Kiarostami to be interviewed. He said finish your interviews with others and then we’ll talk. This went on for about five years, during which I was chasing him all the time. I would call him in his hotel rooms in Rome, Paris. He asked me to just send my questions. I did that and a few months later he called me to say that he had replied to my questions and the filmmaker Mani Haghighi had filmed it. At the end of the video Kiarostami faces the camera and says, Bahman, I did this because I was impressed by your persistency! I have included this in the trailer for the film. The film premiered at Montreal Film Festival in 2013 and was warmly received.

Do you have any upcoming documentary projects, and are there any other topics in pre-revolutionary Iran that need documenting?
On Iranian Cinema before the 1979 revolution, I have done a total of 151 interviews with Iranian artistes and experts who worked in the various fields of filmmaking. Haleh Javanshir has edited four of my films, History of Iranian Cinema, Razors Edge, Beyzaie and Mehrjui plus Darroudi. I plan to make at least three more, including one on Iranian actors and another on the broad history of Iranian cinema before the revolution and New Wave (1968-1977).

Ali Moosavi has worked in documentary television and has written for Film Magazine (Iran), Cine-Eye (London), and Film International (Sweden). He contributed to the second volume of The Directory of World Cinema: Iran (Intellect, 2015)