You are at:Home»Feature Story»Ali Abbasi’s Border is Swedish Oscar selection

Abbasi said he was “overwhelmed” that his film had been selected. “I thought it was impossible to even get to Cannes, but as the film has grown and now is being screened at festivals all over the world, the Oscars [don’t] seem so far away all of a sudden,” said Abbasi, who was born in Iran and educated in Denmark.

Tina is a border officer for a small Swedish coastal port. Eyeing passengers as they walk through customs, looking for contraband. But, Tina isn’t just looking; she can smell it. Indeed, like a tracker dog. “Alcohol. Four or five litres,” she says to her partner about a young teen trying to smuggle in booze. She’s right, of course. “Ugly bitch,” the teen snaps. And well, yes, Tina has a cruel overbite, heavily furrowed brow, bulbous nose and blotchy skin. Her shape, especially in her heavy uniform, is actually shapeless. Her look is somewhat like when vampires turn in Buffy the Vampire Slayer and indeed, the makeup work here is superb, especially up close. But her distinct ability to sniff out emotions, not the actual contraband (“Shame, guilt, rage,” she says), is her skill and one that garners her respect from her peers even if they don’t totally understand it. 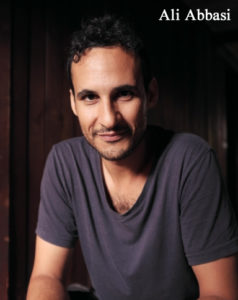 When she calls upon a well-dressed man to show his bag, he hesitates but does. Tina and her partner initially find nothing. But Tina knows something is wrong. “Show me your phone,” she barks. She sniffs it and trembles. She opens the case to find a small picture disk. The man snatches it from her and tries to eat it. Quick action from her border co-workers retract the disk and on it find the most horrific of child pornography and abuse. “I didn’t know what was on it,” Tina says. But this catches the eye of the local police chief who leads the investigation and she decides to use Tina to help solve the crime.

The case gives Tina a bit of purpose. Her life outside of work is a dreary and sad one. She lives out in the forest with an apathetic roommate/sometimes love interest named Roland (Jorgen Thorsson) who has a girl on the side who’s pregnant. He raises show dogs who viciously bark at Tina every day she comes home. She has a father who is suffering from dementia, taking with him the last vestige she has for family and unconditional love. Only insects and animals (other than Roland’s canines) offer Tina a true connection.

That is, until she meets Vore (Eero Milonoff). Vore looks like Tina. Well, he kind of looks like Tom Hardy after a really bad car accident. But, Tina snarls and shakes and feels something she’s never felt before, a kinship. She’s never met anyone that looks like her, or is like her. She doesn’t even know what ‘she’ is. She has Vore pulled aside and roots through his bag. A jar of bugs. A strange canister that looks like a bomb. “What is this?” she asks. “An incubator for larvae,” Vore says leeringly, his face and demeanor that of a very drunk flirt. Where Tina feels shunned and shamed by her appearance, Vore embraces it. He has no fear of judgment and urges Tina to feel the same. Through Vore, she begins to feel liberated from the shackles of societal shame to embrace herself.

It’s here that the film, which has been hinting at with very little subtlety, really dives into its faerie tale source (the film was adapted from a short story by Let The Right One In creator John Ajvide Lindqvist). The film becomes a supernatural gothic romance of gender identity and social construct. The Nordic noir investigation from earlier continues to run parallel to Tina’s own story until the two meet in a shocking reveal. Speaking of shocking reveals, the sex scene between Tina and Vore is one of such bravado and commitment that it will be talked about for years. It’s bizarre, funny and deeply touching.

Enough cannot be said about the performances from Melander and Milonoff. Despite being under layers of makeup Eva Melander gives one of the best performances of the year. Sympathetic and deeply felt, she transcends her extraordinary prosthetics with utter nakedness and vulnerability to create something real. As Vore, Milonoff inhabits elements of both hero and villain and the bridge between Tina’s old world and her new one. If you haven’t seen their previous works, I encourage you to seek them out or at least Google them to see this incredible transition.

Border is the second film from Iranian-born director Ali Abbasi (after 2016’s Shelley). He merges multiple genres, expertly juggling the worlds of human dignity and magical realism with astonishing success.