You are at:Home»CinéEqual»“A Thousand Girls Like Me” at Human Rights Watch Film Festival

A Thousand Girls Like Me a film directed by Sahra Mosawi-Mani is scheduled to screen today, June 20, 2018 at the Human Rights Watch Film Festival in New York and it will be coming to MUBI in 4 days.

We had the opportunity of interviewing  Sahra Mosawi-Mani and we asked her to present her film to our audience.

A Thousand Girls Like Me begins in 2014 when, appearing on a national television show, Khatera publicly accuses her father: for more than 13 years, Khatera suffered physical abuse and repeated rape at the hands of her father, resulting in numerous pregnancies. Most of Khatera’s pregnancies were abruptly ended when her father forced her to abort, but two reached full term. Khatera’s three-year-old daughter, Zainab, was spared this horror, but Khatera fears for her and her unborn child.

Despite Khatera’s many attempts to file charges against her father for his crimes, neither the Afghan police nor the legal system helped her. With her television show, she finally succeeds in bringing her case to justice; yet this brave action turns her family and the community against her and her mother. Her uncles have their own idea of justice and believe that the death of Khatera and her daughter will end the shame on their family and exonerate their brother. Our story follows Khatera during those months, when she’s fleeing from her uncle’s threats, living
with her mothers and kids in safe houses, and goes through the procedures of the legal system.
Despite the fact that her father finally gets arrested and Khatera has the signatures of 30 neighbors and the local Mullah corroborating that they were aware that Halim was sexually abusing his daughter, the court, finally ignores this evidence. The judge shows no concern for her horrific abuse, suggesting that she could have ended her plight by killing herself, or her baby, or by simply returning home and forgiving her father.

Far from being dissuaded, Khatera intensifies her efforts to seek justice and ensures her father doing no further harm. She finds Nahid, an attorney who makes a stronger case, based on a DNA test proving that Khatera’s children are her siblings, too. Nahid begins a court case that breaks legal ground and all looks promising for a conviction.

In 2016, Khatera finally succeeds in getting her father sentenced . As the family threats go on,the only remedy for Khatera and children is to leave the country. 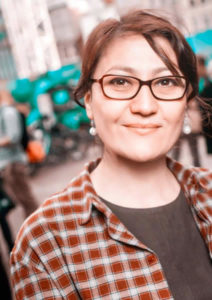 Sahra Mosawi-Mani is an award-winning documentary filmmaker, Lecturer at University and the founder of Afghanistan Documentary House. She started working in media from 2001 with the goal of using media as a catalyst for good. Since, got her Master in Documentary film making from University of the Arts London she has focuses on creating documentaries centered around her own country Afghanistan, that lack democracy and equality.
Beyond the Burka (2014) International Women’s Film Festival (Herat): First Price Afghan International Film Festival (London) : Special mention Kaloo School (2013) Nominated in : Middle East Now (Florence)