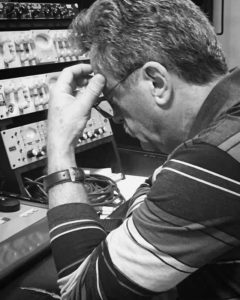 Farhoudi worked with  major Iranian artists for a long time, using his knowledge and creativity to record some of the best albums ever produced in Iran.   Nasser Farhoudi was born in 1952 in city of Damghan and moved to Tehran at the age of 11. He graduated from Iranian Television University in the field of electronics and while studying, he also started to work as a sound engineer at Iranian television.  Later Nasser Farhoudi, joined Pop studio and worked there until the last days of his life.  He has got a long list of film music recording in his credits
He was loved by everyone that worked with him and he will be remembered as a great artist and a human being
Share. Twitter Facebook Google+ Pinterest LinkedIn Tumblr Email