You are at:Home»Film Reviews»A HERO – A Masterpiece, Not Fully Recognized

“A Hero” is the apex of Farhadi’s cinematic development. This Film exempliﬁes all the characteristics of Fahrad’s style and it’s the perfect example to comprehend his Cinema. While viewing “A Hero” it feels that we are witnessing everyday life events without any middlemen. Although all ﬁlmmaking elements have been arranged in detail, they are hidden from our perception. The narrative appears to be simple, however, there are numerous layers and nuances that are difﬁcult to perceive. Every time we view this ﬁlm, a new aspect of the ﬁlm is discovered. The characters appear as ordinary people who are neither bad nor good. Sometimes they conceal the truth and sometimes they outright lie because others don’t comprehend the position and conditions they’ve been through. They are affected more by their surroundings and social circumstances than by their own volition. These are some of the aspects of Farhadiʼs cinematic style. After viewing “A Hero” several signiﬁcant questions emerge such as: What exactly is going on in the story? How can a white lie cause such a catastrophe? Why are debtors put in prison? And ﬁnally, in terms of technique, how is such a stressful rhythm formed from simple everyday life events?

Rahim, the main character of “A Hero,” is an honest, decent, and simple-hearted man who has been imprisoned for being in debt! The essence of Farhadi’s films is often described symbolically in the opening sequence of his films. In “A Hero”, Rahim climbs numerous stairs in the tomb of ancient heroes of Iran and then he rapidly descends. In the next scene, his girlfriend descends the stairway of her dwelling to meet Rahim. According to this symbology, the plot is about the rise and fall of a hero. Rahim becomes a hero after returning a missing bag of gold coins to its owner. But then, he falls because of a white lie and ultimately loses everything. Rahim, who has always been influenced by the opinions of those around him in making decisions, finally makes his own decisions. In so doing he fights resolutely and stubbornly for what he knows to be right to preserve his son’s honor and dignity. His decision sends him back to jail, however he is satisfied by his own choice. The last sequence of the film starts at a bus station. Rahim hands his son to his girlfriend and bids them both farewell. The final shot is one continuous long shot with a clever scene composed of sharp lighting contrasts. In this shot, he enters the prison and then a gray bearded man comes out of prison. Outside, a woman is waiting for him. The bus has arrived, the same one that Rahim had missed in the film’s opening scene. The two board the bus and leave. Rahim’s girlfriend seems to have waited for his return, However, what became of his son is not divulged. 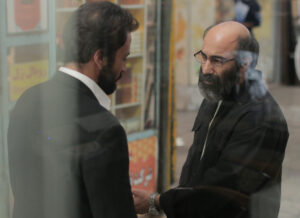 Based on classical style of literature, Bahram is the anti-hero character (antagonist) and should be the negative character. He appears to be aggressive, irrational, and self-righteous. However, when seen from his perspective, his remarks are entirely understandable. He has paid off Rahims, heavy depths with difficulty. In other words, even the anti-hero’s character is rational and reasonable. There are no close-ups of any characters and part of their environment is always included in the frame. The characters in the film have a hazy backstory. The coin owner’s character is completely ambiguous. Therefore, the film is pointing the finger at society rather than the individual. “A Hero” is a social drama that considers the circumstances of society as the cause of crises and tragedies. Even Bahram is a victim of a banking system that prevents extending a loan to people like Rahim. Maybe, Maybe Rahim is representing a society that has fallen from its historical grandeur. However, what is clear within this film is the criticism of those who are responsible for the governance of this society. As the Taxi driver says to the administration officer, “pity on this country for being in the hands of people like you.” This society has been immersed in slogans. So that all meaning, and value has been transformed into slogans. These slogans draw a harsh line between truth and lies, good and bad, morality and vice, heroes and villains, friends, and enemies… Such a harsh interpretation of values conforms all judgment to black and white only and eliminates any allowance for a reality that is in gray scales. Farhadi’s previous films depict the complexity of truths in today’s world, truths that are many layered and even the search for them leads into more crises. In “A Hero”, Farhadi shows the incompatibility of a simplistic slogan ridden society with the complexities of truth in the modern world. In the fast-paced rhythm of modern life, social networks represent only a small segment of a highly complicated reality. Therefore, in a black and white society we see that a snippet of news can easily turn someone into a hero or knock him down to nothing. Bahram’s daughter represents today’s younger generation, who share their private lives on social media. A generation that pours its rage and fury into social media with no thought of consequences. In “A Hero,” children who represent the future generations, are witnesses to this era, appearing in most scenes and intently observing what occurs. In the end, a little girl finds out why Rahim returns to prison. 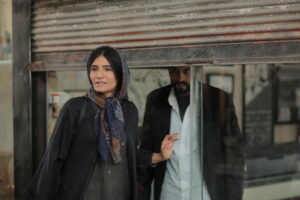 “A Hero” like “The Beautiful City”, Farhadi’s second film, criticizes the laws of Iran. In “The Beautiful City”, the law that imprisons Juveniles who have committed murder until they reach the age of 18 for execution is criticized. In “A Hero” the law that imprisons debtors is criticized. The terrible legislation of debtor incarceration is still used in Iran and a few other nations! In fact, debtors’ prison law existed in Europe during the Middle Ages. In some prisons, inmates were allowed to labor to settle their debts. In the late nineteenth century, European nations progressively abandoned this rudimentary legislation. Because this law disproportionately affected the poor and low-income sectors of society. In the United States, like most countries, no one gets imprisoned for debt. A person can be imprisoned only if he or she does not pay the court-ordered child support expenses after a divorce. Conversely, under Iranian law, it is unclear what happens to the children of indebted prisoners. How many generations of impoverished people should suffer because of a debt? In a hearth breaking moment in the film, a young mother with her little daughter pleads with a charity organization for a modest amount of blood money to save her husband’s life! This statute is also one of the characteristics of the Iranian legal system, that allows for the purchase of even human life!

In Farhadi’s cinema, technique serves the content and is actually a screenwriting tool. Realistic actions, realistic dialogues, real locations, and all the sound and visual elements combine to create a representation of real life in 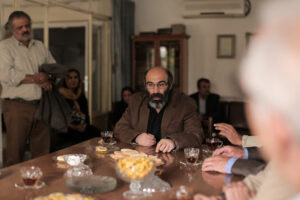 a documentary style. The script is narrated in the third person. We are alongside the characters, rather than within them, and see them from the outside. The camera emulates our vision. Therefore, a normal lens, high depth of ﬁeld and bright lighting is used. Music is seldom heard since it detracts from the realistic narrative. Instead, ambient sounds are very important. Sound enhances the atmosphere of the locations admirably. The sound of the Quran being recited in prison and in the view of the city alludes to the controlling structure and atmosphere that governs society. Editing is paced flawlessly and keeps the audience always connected to the film. Editing while maintaining a realistic style, was also able to transfer the story’s tense mood effectively. One of the challenges of “A Hero” is to create very tense scenes from daily events. Because of the documentary style of the film, many techniques that are normally used for creating tense scenes cannot be utilized in this film such as: shortening length of the shots, using light contrast, rapid camera motions, music, etc. Therefore, one of the masterpiece accomplishments of this film is creating very tense scenes without utilizing these elements. For example, In the scene where Rahim and his girlfriend are lying in the employment office, we are so frightened and anxious. Even Hitchcock would not have been able to create such breathtaking suspenseful situations from a daily life without the use of these elements. The tense rhythm of the ﬁlm is mostly created by the powerful narrative of “A Hero.” This narrative delicately and intelligently establishes the context for every crisis. It then produces a larger crisis from within each crisis. For example, prior to being videotaped by the TV crew, Rahim steps down the prison stairs to the door, which is constructed of vertical and horizontal bars, then he is inspected by the guards. Farhadi raises a red ﬂag here, warning that a crisis is to follow. In the following scenes, Rahim is interrogated. Additional factors have been used to create tension, such as the positioning of the characters in the scenes and their movements in different directions. Glasses and reflections, lines such as, Bars, shutters, water pipes, shadow lines, window frames, door frames, picture frames, etc. All these features are elements that create tension in the scenes while they also have a meaningful place in the narrative. What is evident is that all these details, nuance and subtlety is included in the script down to the smallest detail.

Asghar Farhadi is a master of cinema with a deﬁnitive style that establishes clear objectives in making ﬁlms. What distinguishes Farhadi’s unique style of drama is the creation of drama based on everyday life rather than incidents. In a typical drama, we are confronted with a series of events that go far beyond the ordinary events of everyday life and are in fact contradictory. Only a very creative mind with pure ideals can conjure up dramatic plays out of everyday events. In Farhadi’s films, since all ﬁlmmaking elements are invisible. We are immersed into the story as if we were part of it. Our emotions are heavily engaged throughout the film. At the end we won’t be able to stop thinking about the film, about the characters, about ourselves, about our judgments and about the complexity of truth! Each of Farhadi’s films is a unique life experience.

Kiana Hashemi Graduated from the Dramatic Arts University of Tehran in Cinema, specializing in editing. Was a film editor in House of Culture. Wrote film reviews for the “Film” magazine. Wrote articles for “Etemad” newspaper. Was executive director of “Hamguh”, advertising and film making Co. Has been a freelance film editor and director for independent projects after immigrating to the United State.