You are at:Home»Other Arts»Lily Afshar talks about her music and her emotional connections to Iran

Lily Afshar’s personal story begins in her native Iran. Born in Tehran to a family with ancient roots in the northern region of Azerbaijan, at ten years of age she first encountered the guitar while visiting a cousin who was taking lessons. She told her father she loved the guitar; the next day he presented her with her first instrument and arranged for lessons. Her prodigious skill and love of music eventually led her to The Boston Conservatory, where she earned a bachelor’s degree in music, and to The New England Conservatory, where she received her Master of Music. At Florida State University she studied with the renowned Bruce Holzman and became the first woman in the world to be awarded the degree of Doctor of Music in guitar performance.

Cinema Without Borders’ On camera interview with Lily Afshar:

POSTGRADUATE EDUCATION AND ACHEVEMENTS
She continued her studies with summer classes at the Banff Centre for Fine Arts and the Aspen Music Festival, and received scholarships for three more summers of advanced training at the Accademia Musicale Chigiana in Siena, Italy, all with the famed Oscar Ghiglia, for which Afshar received Diplomas of Merit. She was selected to play for Maestro Andrés Segovia in his master classes held at the University of Southern California. In 2000, she won the Orville H. Gibson Award in Los Angeles for Best Female Classical Guitarist. Notable awards also include a top Prize in the Guitar Foundation of America Competition and Grand Prize in the Aspen Music Festival Guitar Competition, among others. She received the Tennessee Arts Commission Individual Artist Fellowship Award in Music and a National Endowment for the Arts Recording Award. She is a three-time winner of the Annual “Premier Guitarist” awards given by the Memphis Chapter of the National Academy of Recording Arts & Sciences, and she was chosen as an “Artistic Ambassador” to Africa for the United States Information Agency. 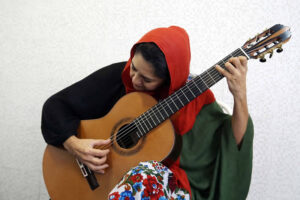 As a tenured professor and head of the guitar program at the University of Memphis Rudi E. Scheidt School of Music, Afshar received the 2000 Board of Visitors Eminent Faculty Award and the 2008 Alumni Association Distinguished Teaching Award. In 2011 she was honored with the Distinguished Alumni Award from The Boston Conservatory. She regularly conducts guitar master classes in conjunction with her touring and during summers in Iran. She has arranged for guitar and published Five Popular Persian Ballads with Mel Bay Publications, which also produced a DVD in 2008 entitled “Virtuoso Guitar” featuring live performances and an interview with Afshar. She also released six instructional DVD’s “Classical Guitar Secrets”, Vols. I & II for beginner to Intermediate guitarists, and six instructional DVD’s “Classical Guitar Collection”, Vols. I & II for Intermediate to Advanced guitarists. Both are released with Guitarcontrol.com.

PERFORMANCES
What brings excitement to a performance by Lily Afshar is her remarkable technical precision plus a passionate musicality which is the product of her personality and life story. Appearing onstage in the United States and around the world, she has delighted audiences not only with a fresh approach to the standard classical guitar reportoire, but also with music that is new and different. Afshar introduced quarter tones on her 2006 CD “Hemispheres” by adding fretlets to her guitar to reproduce accurately the tones required by an eclectic repertoire of new compositions and arrangements. Performing as a soloist at Wigmore Hall in London, she included the quarter tone pieces as part of the program. England’s Musical Opinion Magazine praised Afshar for her “fresh sense of programming” and “her ability to draw listeners onto the edge of their seats….” Embracing her Persian heritage, Afshar has not only performed her arrangements of Persian and Azerbaijani pieces; she has also fascinated concert goers with occasional live performance on the seh-tar, a traditional Persian instrument which evolved over many centuries into the guitar. Afshar taps the ancient root of the instrument which predates its arrival in Spain from Persia via the Arab conquest of Andalusia in the eighth century A.D. Her performances always include music that is as rich and beautiful as a Persian miniature or tapestry. 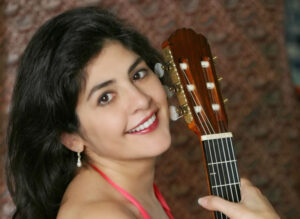 Not surprisingly, Afshar’s advanced musical training and passion for going beyond the traditional guitar repertoire have made her an artist who is sought after by contemporary classical composers. Collaborations with international composers have resulted in world premieres of works by Carlo Domeniconi, Reza Vali, Garry Eister, John Baur, Gerard Drozd, Loris Chobanian, Arne Mellnas, Kamran Ince, Barbara Kolb, Marilyn Ziffrin, David Kechley, and Salvador Brotons. Her sixth CD release, “Musica da Camera,” is her first recording of chamber music for the guitar and includes the world premiere of Vladislav Uspenky’s Musical Sketches on Pushkin’s Eugene Onegin, as well as more traditional works by Paganini and Piazzolla. Beyond the United States and Canada, Afshar’s concert schedule has taken her to solo, chamber music, and orchestral performance venues in England, Ireland, France, Italy, Denmark, Jordan, Iran, Australia, and New Zealand, as well as countries in South America and Africa. From Wigmore Hall in London to the Kennedy Center for Performing Arts in Washington, she has played before a wide range of audiences and learned to bridge gaps of culture and distance through her music.

RECORDINGS
Those who appreciate the classical guitar can enjoy the music of Lily Afshar on seven CD recordings which have attracted international critical acclaim. Her first recording, “24 Caprichos de Goya, Op. 195″ composed by Mario Castelnuovo-Tedesco, was released in 1994. This work led her to develop a unique multimedia program combining performance with a power point presentation and interpretive commentary on Francisco Goya’s satirical black and white etchings which inspired the guitar pieces, a program which she still presents on request. Her second CD recording, “A Jug of Wine and Thou,” inspired by the famous poem of Omar Khayyam, was released in 1999 and features arrangements of Persian melodies. Her third and fourth recordings, “Possession” (2002) and “Hemispheres” (2006), feature a combined total of eight world premieres. “Hemispheres” reached No. 7 on Billboard Magazine’s Chart of Top Classical Albums in 2006 and attracted the attention of National Public Radio’s Robert Siegel, who featured Afshar on “All Things Considered.” Next came “One Thousand and One Nights,” released in 2013 in Iran. Her sixth CD, “Musica da Camera,” released worldwide in October 2013, demonstrates the depth and range of a singularly accomplished artist in her prime. Her most recent release is “Bach on Fire” (2014) – an intricate and novel arrangement of J.S. Bach’s compositions using her published book with Mel Bay – Essential Bach: Arranged for the Guitar by Lily Afshar.