You are at:Home»News»“IN SEARCH OF FELLINI” TO CLOSE THE 12TH ANNUAL LOS ANGELES ITALIA FILM FESTIVAL

The World Premiere of AMBI’s “In Search of Fellini”, a coming-of-age drama directed by Taron Lexton, has been selected as the closing night film of the 2017 Los Angeles Italia – Film, Fashion and Art Fest. It was announced today by festival founder-producer, Pascal Vicedomini along with AMBI principals, Andrea Iervolino and Monika Bacardi. Golden Globe® nominated actress and human rights activist, Maria Bello, who stars in the film will be in attendance for the February 24th screening. She will also be accepting the LA Italia Excellence Award during the Awards Ceremony, which director, Gianfranco Rosi (“Fire At Sea”) will open as the Master of Ceremony. 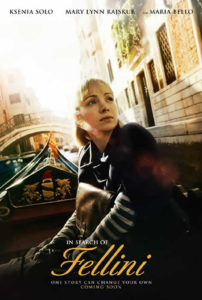 As in prior years, the 2017 festival will take place at the Chinese Six Theatre complex at Hollywood & Highland, adjacent to the home of the Academy Awards®. It will put Italian cinema in the spotlight through a series of premieres, screenings retrospectives, and exhibitions.

“We are extremely thankful that AMBI has given us ‘In Search of Fellini’ as our closing night film,” said Vicedomini. “Aside from focusing on a revered Italian filmmaker, it also displays some of Italy’s most historic and beautiful locations to audiences around the world.”

“In Search of Fellini” is the story of a shy small-town Ohio girl who loves movies but dislikes reality, discovers the delightfully bizarre films of Federico Fellini, and sets off on a strange, beautiful journey across Italy to find him.

“This is a 30-year-labor-of-love,” said Cartwright. “Finding and working with Taron, Maria, Mary Lynn, Ksenia, and the entire crew has made this a real dream-come-true.”

LA, Italia 2017 is presented by Capri in the World Institute with the support of the Ministry of Cultural Heritage and Activities (DG Cinema) in collaboration with ANICA, the ITALIAN TRADE COMMISSION, as well as Mediaset, AMBI Group, and ISAIA. It is also sponsored by the Hollywood Chamber of Commerce and the Italian Consulate General in Los Angeles.