You are at:Home»Other Arts»The Magnificent Three celebrate the 38th anniversary of Film Magazine

At a time when the number of existing film magazines are diminishing, It is quite heartwarming to witness and celebrate the 38th anniversary of a monthly film magazine in Iran. When I went through the pages of the last issue of Film Magazine I found several quite interesting articles, studies, critics and stories. I spoke with one of the founders of this amazing publication, Abbas Yari.

Mr. Yari told me that with two of his friends, Houshang Golmakani, Massoud Mehrabi,  started a publication called Cinema in video, it was the time of a terrible war between Iraq and Iran. Enemies planes were dropping bombs over the Cities of Iran killing innocent civilians. Movie theaters were abandoned by their owners or shut down. Movie business was also in limbo, people in this industry had no clear view of the future. Movie stars had left the country. It was then that we decided to do something, we though our love for Cinema, Will help us to overcome the obstacles. We went through a lot of challenges and troubles but now we can see the fruit of the labor. 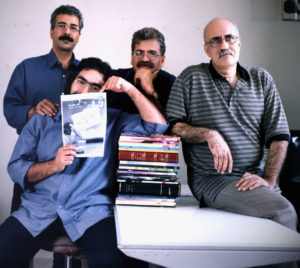 Mr. Yari added that: In 1982 we published The first issue of the Film magazine and since then we have never stopped publishing the magazine under no circumstances. We never lost our independence we never allowed our differences with people in the industry or our friendship with them influences the fair way that we had decided to treat everybody with. The three of us, Houshang Golmakani, Massoud Mehrabi, and I, Abas Yari, have been working together for the last 38 years, and even we are three different people with different kind of thinking, we always managed to keep our bound together, and dedicate our lives to keep this publication alive. I know that there are many people who wonder how can three people work together for such a long time without breaking their friendship. Our challenges may be different now, but they are still there. Today in the world of social media, everyone is stuck with their mobile phones receiving thousands of fake or true information every second. There are some good into this but at the same time it takes away from the time that people would have spent on reading serious and important articles or books. Add to this the shortage of paper and other troubles that we face on daily bases. But when every months we look at the printed magazine it gives us a comfort, then we receive heart warming comments from our readers, we feel those are our ultimate rewards. 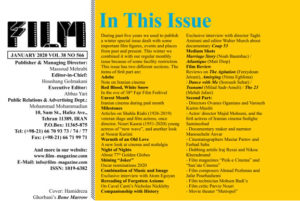 Looking through the 566th edition of the Film Magazine, there are a few interesting and touching stories about Iran’s current troubling days and the state of films and filmmaking and film festivals. There are remembrance of late Iranian stars, Shahla Riahi, Nouri Kasraei and legendary actor and director Nosrat Karimi. Film Magazine has reports on Golden Globe Award winners and 2020 Oscar winners and reviews of films such as Marriage Story. I loved the good and analytic interview with Taghi Amirani and Walter Scott March about the wonderful documentary, Coup 53. The list of good and exciting articles of the Film Magazine goes on and on. I raise my hat in respect and admiration for the great and unbelievable job done by this creative “Magnificent Three”, Houshang Golmakani, Massoud Mehrabi, and  Abas Yari. Congratulations!