You are at:Home»Film Reviews»Dominik Locher and his new film Goliath
The Swiss director Dominik Locher is competing for the Golden Leopard at the Locarno Festival with his new film, Goliath [+]. Full of references to his own experience as a father, Locher lays himself bare as he explains to us just how much protagonist David mirrors his own troubles as a father.

Cineuropa: Where did the idea of the film originate?
Dominik Locher: I’ve been thinking about the theme of masculinity for a while now, about the desire to be stronger than we are. The idea was going through my mind for about six months I think, and then my partner got pregnant and I had a sudden desire to bring these two realities together: the belly of a woman growing simultaneously with the developing muscles of a man for nine months. Yesterday an old woman approached me and said “my husband and I used to have the same type of discussions when we were younger, but we would never have had the courage to speak about them in such a direct way”. What interested me about Goliath was being able to see what happens when communication breaks down, how anger can take control of us when we are unable to talk about our feelings, which can be seen as a sign of weakness – the idea that strength is in some way more important than love. 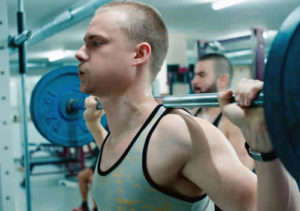 Goliath was defined as a film “about a generation”. What can you tell me about this?
I believe that the film is primarily about the enormous pressure that we put on ourselves to be perfect, to be successful, how we live with unrealistic expectations. We want everything to be better, and we obsess so much about ourselves that we no longer give a thought to the people around us. There’s a word in German that summarises this feeling well: “Verrohung” (degradation). What’s more is that in seeking perfection, we are chasing a highly unrealistic ideal that frustrates us, fills us with stress and insecurity, and that insecurity leads us to mistreat those around us.

Taking the films Wonderland [+], Chrieg [+] and your own Tempo Girl [+] as examples, it seems that many young Swiss filmmakers are questioning Swiss identity. What do you think?
In the 70s the feminist movement stated that the personal is political. The way we behave in private tells us something about society in general and, to go back to what we were saying earlier, we all need to be more aware of the world around us. It is because of this “Verrohung” that extreme right movements manage to become so influential.

Confused men no longer know how to behave, there is a real crisis of emotion, and there is a lot of violence among Swiss families but nobody talks about it, even though it’s important to do so. The main reason David is so violent is because of his inability to share. He’s a little bit like a pressure cooker. That fear of being left, of divorcing and losing his children or simply letting himself down, all this can have fatal consequences on a person. Perhaps this is the main theme of the film. David is a normal man; he isn’t a troublemaker. Despite this, he becomes as dangerous as someone that society might deem a problem, about one might say: “I would never have expected that from him, he seems so normal!”

Speaking about the new generation of Swiss filmmakers, you once said: “we no longer try to please everybody, but instead aim to develop a strong artistic vision”. What is your artistic vision?
When I watch Blue My Mind, Chrieg, Goliath or Cherry Pie [+] I see films that really believe in image, films that believe in the viewer’s ability to interpret body language and to understand a film through its actions and not its dialogue. In all of these films, what’s important is the way in which the actors present themselves, as opposed to what they say. If you speak, you can also lie, whilst our bodies are much more direct and straightforward. In Switzerland there are so many films based on dialogue, which is fine, but young directors believe a lot more in the power of image!

It’s better to risk being misunderstood or rejected than to create a work of art that merely follows the rules and takes no risks. During the Q&A following the screening of Goliath, somebody told me that they felt repulsed by the violence and silence between David and Jessy. For me, art must produce this type of emotion, stimulate discussion and provoke something strong inside us.