You are at:Home»Film Reviews»21 DAYS LATER, a powerful social drama

From the comfort of your seat and cool air of the theater, camera and the story takes you deep into the society, not too far, just a subway ride away. Where you find a lot of similar stories.

There is a small family, the father passes away, the mother (Sareh Bayat) has cancer and the younger son has no idea about what is going on. But this is his older brother played by Mehdi Ghorbani that with his magnificent performance takes your hearts with him where you feel his helplessness in finding cancer drugs for her mother, a mother with the image of an angel, (and her make up helps to establish this image.) 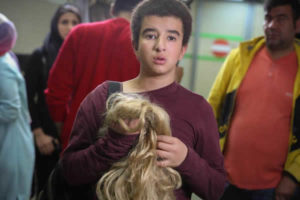 This boy like other boys of his age loves movies and to deal with the pressures of life does anything you can imagine, and convinces you that what he does is right and leads you to admire him.

When the son learns that he has to provide her mother’s expensive medicine every 21 days he falls apart, but encounters his loneliness and helplessness with courage and sacrifice. His pain is so hard that he gets to the point of staying in this world or leaving it. His young body and lack of experience separates him from the dirty world of lies and tricks that has surrounded him. In the best shot of the movie, he steps between the railways and puts his life at risk facing a train that rushes towards him. The train is the symbol of all the problem and pains that he has to take , and his will is so strong that powerful train bows to him and goes to a halt. A possible happy ending. 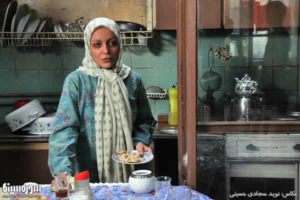 There is a clever sense of humor in a few funny scenes in the film here and there to relax the audience.
Performances by Sarah Bayat, Mehdi Ghorbani and Hamidreza Azarang are amazing.

Set & custom design, lighting and cinematography are all in service of the story and it’s a compliment to say that you don’t notice them.